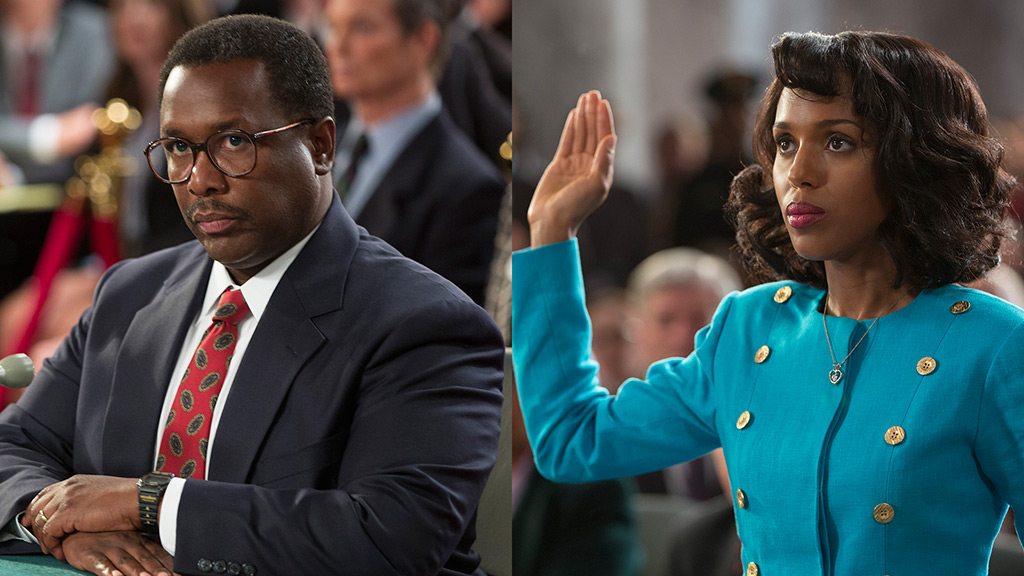 Last Saturday, I watched Confirmation on HBO featuring Kerry Washington and Wendell Pierce. They’re both actors I admire, immensely talented people whose work I was greatly looking forward to. I feel like we live in a new era where Black entertainers are being given more varied roles, and much more often than I’ve ever been used to. It’s great to see faces like mine on my screen, it’s a feeling I’ll never get tired of experiencing. So I was more than ready to be captivated by these two skilled actors on a network known for their superiority. And captivated I was.

I’m 23 years old. I wasn’t born yet when Clarence Thomas was appointed to the Supreme Court. I’ve taken history classes in the past, yeah. I’ve learned about the processes of elections and appointments to different sections of the government (granted, government was never a topic of interest to me, so I may have dozed off in one or two or ten of said lessons.) However, the Senate hearings of 1991 were not once brought up in any course I’ve taken. It’s not something I ever learned about, or ever had the intuition to seek out on my own. In short, I had no idea what Confirmation was about before Saturday night.

I knew Thomas was confirmed to the Supreme Court already, obviously, since he’s still there today. However, I had no idea the circumstances, the magnitude, the intensity, the grit involved in the case. Thirty minutes into the movie, and I was on edge. I’m no stranger to sexual assault cases. I’m well versed in how victims of sexual assault are picked apart, blamed for their own assault, and shamed for the violence they were subjected to. It happens everyday.

To see it played out, and so heart wrenchingly acted, was nearly unbearable. It was infuriating. One thing I am always so immensely grateful for is live-­tweeting because it was comforting to check the Confirmation hashtag and see thousands of other people expressing the same frustrations I was feeling.

And while I was ready to be upset by the issue of sexual assault in the film, I did not anticipate to be enlightened, and so painfully, by the racial politics that played a part in this case. Watching Anita Hill be torn down by fellow Black women was heartbreaking. That a large percentage of Black Americans were convinced that these allegations were being brought forth to bring Thomas down because he was a Black man, and that Hill was dividing the Black community was crushing. That they didn’t believe her and called her crazy and jealous was astounding. And that Thomas claimed the hearings were comparable to a lynching was deplorable. This film was draining for me ­­and so many others­­ to watch. This piece of history, so new to me, felt like it could’ve happened yesterday.

How ironic, that Clarence “society is too sensitive about race” Thomas used his race to force a false dynamic to give him an edge in this case. How interesting, that Clarence “racial imbalances do not always disfavor minorities” Thomas purposefully compared himself to a victim of brutal racial violence, yet also believes that affirmative action is equatable to slavery. How intriguing, that Clarence “the Voting Rights Act is unconstitutional” Thomas understood exactly how race and racism work, and how best to use white guilt to his advantage in 1991, but has since been hard at work letting the world know exactly how little he thinks of other Black people; how dismissive he is of the very same power structures that supposedly led to his court hearings.

How insulting. How pathetic.

Clarence Thomas, his entire team, the entire Senate, the entire country treated Anita Hill as society treats all victims of sexual assault: as greedy or jealous or crazy liars who are just out to get something for nothing. It’s telling exactly how high up victim-­blaming goes, and how far people are willing to go to twist the narrative in order to get what they want. Seeing the mechanisms behind the cover­ up was harrowing.

But throw in the way conversation about race was similarly twisted into the mix and it becomes a completely different monster. Clarence Thomas had a resounding amount of support, especially because he was slated to replace Justice Thurgood Marshall, who is still heralded as a pinnacle of Black greatness in America. Black people were willing to overlook the allegations against Thomas in support of him. Black solidarity could not house both Thomas and Hill, and a preset societal precedent to discredit both sexual assault victims and Black women made Anita the loser, the liar, the traitor in the eyes of many.

Thomas pretended to be a champion for the people whose skin he shared, effectively tossing Hill under the bus on a national stage, and then proceeded to throw the rest of us down there with her in both his silence on the bench and his numerous anti-Black sentiments. Hill was made a woman scorned, afflicted with erotomania, and lashing out in jealousy at Thomas, who we were all so sure would back us up once he held a seat at the highest table of justice in this country. Except he took the same faith in blackness that condemned Hill and shattered it.

This film was taxing. It was absolutely exhausting. I cannot even begin to imagine what it was like to live it, much less see Thomas and company tear a Black woman down in the name of blackness, then besmirch it in the coming years. Watching the film, learning this history, and connecting it with what I know about justice today was a lot to take in, especially in two hours.

It made me furious. It made me absolutely enraged. It also made me feel helpless. Stories of sexual assault all have the same symptoms: victim-­blaming, violence swept under the rug, the unwillingness to stand up for what is right because it’s easier or because the perpetrator is someone of power. Watching this vicious, violent cycle loop over and over and over is tiring and it often feels like things will never change. Seeing a man cloak himself in faux racial prejudice, something that is only getting increasingly more difficult to prove and fight against, only to dismiss every single other instance of racism to cross his desk, is insufferable. And after seeing the story behind his rise to power, I felt like the floor had fallen from under me.

Clarence Thomas still sits on the bench. I watched Wendell Pierce portray him to a T, down to his unnerving shifty eyes, and get away with the heist of the decade, and I was reminded that his real­-life counterpart still made a career steeped on the neck of Anita Hill and a manipulated Senate hearing. I came out of this film feeling weak. It didn’t make me feel like I thought it would. I love Kerry Washington with my whole heart and I was excited to watch her work her magic, but I was gutted by this movie. What’s the point of fighting if the people in power always win? What does it matter if the outcome is always the same? Nothing changes.

I’m grateful for the end scene that showed Hill receiving tons and tons of letters by women who were motivated by her bravery. That such influence was ignited across the country was touching. But I still couldn’t shake my rage. It was stifling and I couldn’t stop myself from venting about how unfair this all was, how much sense it didn’t make, how nothing will ever change.

And through my tweets and retweets exploding with fury about this ugly wheel of oppression and injustice, arose something that brought a tear to my eyes. Granted, I was already so high on the intense emotions Confirmation incited in me, it didn’t take much to bring me to tears.

@heycheyennehey Watching the original hearings I felt same then inspired by her honesty, dignity, millions of women stood up. Keep fighting.

“Watching the original hearings I felt same then inspired by her honesty, dignity, millions of women stood up. Keep fighting.”

God, I can’t even explain how deeply this resonated with me. I was so wrapped up in negativity, so overblown by the severity of how much wrong had transpired that I couldn’t even see the light. And this simple tweet lifted me out of the outrage I was stuck in. After releasing so much anger, there was nowhere else to go but up.

We have been fighting for long. It is so easy to get beat down and feel like nothing matters, like nothing will ever ever change. It is so easy to be discouraged and accept that power structures as strong as racism and sexism can never be dismantled, especially when it’s proven time and time again to thrive off the silence of its victims.

But more powerful, deeper and more resounding than these systems of oppression is the resolve and trust that we will overcome. Even when it feels hopeless, it is strengthening to see the immense faith that others still hold onto; the pull of the hand they offer when you’re so deep in defeat that you can see nothing else. It’s tremendously encouraging to see the faith people can keep in the face of what can seem like inevitable defeat. That hope is electric. That conviction is absolutely contagious. Keep fighting.

This one tweet relit the fight in me and I am so glad it did. In two hours, I was defeated and ready to quit, and in a matter of seconds I was inspired. It’s amazing. It’s breathtaking. It’s powerful.

There is nothing else we can do. We can’t win if we don’t fight.