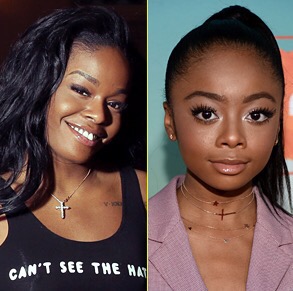 A few short hours ago, 14-year-old Skai Jackson of meme and Disney fame, scalped Azealia Banks bald for the world to see on Twitter after Banks took shots at Zayn Malik for allegedly leaking her number to fans. Banks, the resident troll of Twitter, has no shortages of random, offensive outbursts, and is always immediately called out on it. From supporting Trump to trashing Beyoncé , Banks is the queen of coming when absolutely no one called. This time she accused Zayn Malik of biting her futuristic style in his new video “LIKE I WOULD,” taking to Instagram and Twitter in a rant that lasted half a day, because apparently she has a monopoly on blue filters and tattoos.

The allegations were ridiculous, of course, and certainly didn’t call for Banks to resort to racist and homophobic name calling, although that does seem to be her M. O. For hours, Banks went on and on, calling Malik a colorful variety of offensive insults, one of which spurned the hashtag #curryscentedbitch, which South Asian Twitter fabulously stunted on. The fact that Ms. Banks was clearly in the wrong did not stop her from being so aggressively combative and, just like every time she goes on a nonsensical tirade, Twitter was tired of it. And one hero in particular, our new supreme Skai Jackson, took her to task.

Jackson did not hold back for the near hour she and Banks tweeted back and forth. The 9th grader supplied punch after punch, satisfying all of our need to ether Azealia when she acts a fool. Her greatest hit: “My memes are more relevant than you.” Tell it all. The child was born in 2002 and she read Banks for filth. She left not one edge on the rapper’s head and will probably be presenting her already iconic read at her school science fair.

Conclusion: she will publicly drag you for the whole world to see.

Banks should probably lie low for a while; being so ruthlessly destroyed by a child has got to be the most embarrassing thing she’s done, and the girl has a laundry list of ’em.

Black Twitter got in formation immediately, as usual, completely backing Jackson as she leveraged blow after devastating blow to Banks. It was incredible. Never in my life have I witnessed a roast so perfect as this one, and the fact that it was so effortlessly served up by a young Disney Channel star is magnificent. This is a once in a lifetime kind of drag, the kind that’s impossible to recover from. Banks is already known more for her incessant Twitter beefs with random people and hostile and offensive language, but she’ll forever be known as the wack musician (citation needed) who not only instigated an online fight with a child, but lost in front of everyone. It’s like Christmas.

Shout out to Skai Jackson, who slayed all over the TL tonight and proved to us once and for all that there is no age limit on roasting. You better get stuck on this band aid brand, Azealia, because you’re gonna need a few after that drag.

Here’s the entire conversation in all its glory. #TeamSkaiWalker