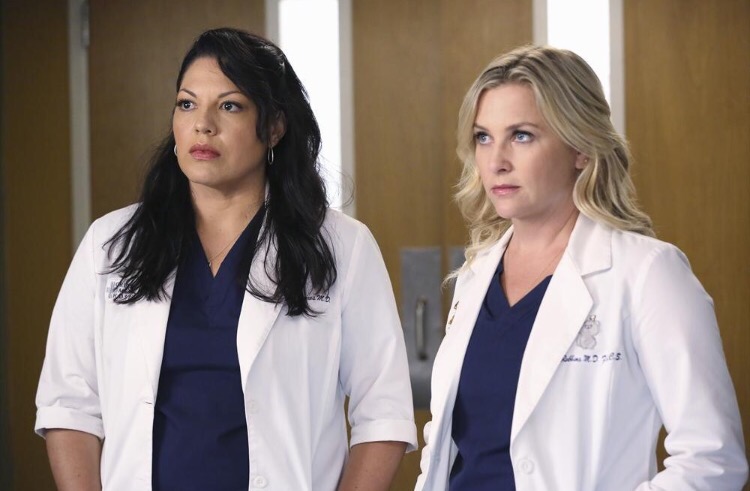 It’s been more than a decade and Grey’s Anatomy still thrills us with harrowing medical mysteries, last minute life-saving surgeries and, of course, surgeons hooking up in on-call rooms and falling in love from across the OR table. The TV series has always been as much about its surgeons’ personal lives as it has been about the medicine. With an ever-growing cast of colorful characters, it’s no wonder why the show still pulls great ratings week after week. The show has been praised numerous times for its diversity, heralding Shonda Rhimes for her use of colorblind casting, not assigning a specific race to the characters she writes, which created a racially diverse fictional world. While colorblind casting promotes a greater variety of races on screen and normalizes diversity, erasing a character’s color can lead to other issues; issues made all the more noticeable in the heart ofGrey’s Anatomy’s most prominent narrative: relationships.

Out of the 39 major, plot-related relationships that have been featured on Grey’ssince season one, 14 of them have been interracial, putting them just over 35%. Comparatively, according to the Pew Research Center, in 2013 interracial marriages were at a record high of 13%. Not every interracial pairing is or has been married, but the percentage of interracial couples on Grey’s is pretty substantial in comparison to both real-life statistics and other television shows.

Despite the diversity of the cast, the majority of the characters are white and the majority of the relationships have one white person in them. According to Vulture, it would seem that “interracial pairings in popular culture still tend to necessitate one white person.” There have only been two interracial relationships on the show that weren’t half white; Cristina’s tumultuous broken engagement to Burke and her on-call room hook ups with her intern Shane Ross in season 10. Callie, the only Latinx character on the show, has also only ever slept with, dated, and married white people, while Cristina, the only Asian American main character on the show, has dated, hooked up with, and married men of different races.

Just like every relationship in Grey-Sloan, every interracial relationship is laced with explosive drama; Grey’s Anatomy has never shied away from important and sometimes uncomfortable topics. Cristina and Owen’s relationship is full of disagreements and tense arguments over their different stances on having kids and her subsequent abortion. Callie and Erica catalyzed Callie discovering her sexuality. Callie and Arizona share similar problems to Cristina and Owen: both couples disagree (at least initially) over children, and both couples deal with a partner’s infidelity. Jackson and April argue about how to raise their children and deal with her enlisting in the army, leaving him to deal with his grief over the death of their son by himself. Jo and Jason break up after Jo kicks his ass, with a brief dialogue about male victims of domestic violence. Strangely enough, although Richard faces some subtle racism in “The Time Warp,” when an attending tells him that “ten years ago, [he] wouldn’t have even been allowed in this program” after arguing about whether or not to treat a patient with AIDS, race isn’t a factor when it comes to his relationship with Ellis Grey. Their relationship also leads to myriad other problems, including Richard’s alcoholism, the tension over the two each cheating on their respective spouses, and eventually, more relevant to the present time in the show, how Ellis’s cheating and her relationship effects Meredith’s own life.

From Cristina and Owen’s explosive argument over her abortion to Arizona’s occasional annoyance with Callie’s bisexuality, these couples deal with a wide spectrum of issues. It isn’t like serious and sometimes touchy subjects are off-limits inside of these relationships. So why is race never discussed?

The show doesn’t usually avoid difficult or complex situations (in fact, it more often than not capitalizes on them), which is why it’s so bizarre that after 12 years, the instances race has come up in an episode can be counted on one hand. A recent season 12 episode, “Something Against You” had a subplot where Maggie tells Amelia to check her white privilege. It was certainly progressive, but not necessarily a bold move considering the caliber of handling racism and race relations and discussions elsewhere on television. With other instances being a patient bearing a swastika tattoo in season 4 and Bailey teaching Derek about Zola’s kitchen in season 8, dialogue on race hardly ever enters the personal lives of the surgeons. After a decade of skirting around the subject when brought up, and for the most part ignoring it completely, I wouldn’t be surprised if Maggie’s speech remains the last and only in-depth discussion regarding race we see at Grey-Sloan Memorial.

The avoidance of discussing race on Grey’s Anatomy makes the representation of interracial relationships on the show incomplete and unfinished.

Interracial couples comprise over a third of the romantic relationships that have appeared on the show, but never does the nature of the relationship come up. Mentions of race are already few and far between and these rare conversations never occur between or about an interracial pairing. Interracial relationships happen so frequently and race is already treated as such a low-key subject on the show that the relationships are characterized by the personalities of the couples and their subsequent personal (and medical) drama rather than racial and cultural differences or misunderstandings. The roles these characters play are essentially racially neutral on purpose, so racially specific conversations and problems aren’t created.

Because the show doesn’t address race, the positive and negative aspects intrinsically attached to interracial relationships are missing. Characters don’t learn about their partner’s differing culture and aren’t shown a new perspective through the lens of their significant other. Ethnocentrism goes unconquered because these characters’ ethnicities are erased inside of their narrative. There are no story lines of a characters’ parents and families being resistant or dismissive of the relationship because of their race. There’s no subtle racism in the snide, judgmental comments of friends. There are no instances of one’s race being used against them by their partner, like other identities have been bitterly brought up in arguments, like Arizona inferring Callie’s bisexuality makes her untrustworthy and Jackson calling April’s Christianity unintelligent. These interracial relationships don’t exist to push a commentary about themselves onto the audience.

Even Sandra Oh, who played Dr. Cristina Yang for 10 seasons, said she wished race was brought up on the show more. She told KoreAm Journal, “It bummed me out because I feel like, this could be a great story idea, or even like a joke. But [Grey’s Anatomy’s producers] would not go for it, because it was a show choice.”

For such a large dynamic on a show as diverse as Grey’s Anatomy, it is a bit odd that the ever-present relationship drama never revolves around race.

This is neither good or bad. The argument can be made that it’s commendable that interracial and same race relationships are made to be equal, none are shown to be more superior or inferior in quality than the other based on race. Sex and love are treated just as importantly as the medical drama these surgeons deal with everyday and is explored just as intricately. Because of the series’ reluctance to bring up race, no problems inside of interracial relationships differ from same race relationships. Every couple faces the same incredibly dramatic roller coaster (or carousel, if you will), race notwithstanding; butting heads over surgeries, living together, jealousy, cheating, and everything in between.

Grey’s Anatomy definitely displays interracial relationships more frequently than other shows. While it’s not up to one show to single-handedly address or fix every single iteration of racial issues, it does bear a responsibility to retain a modicum of believability within the parameters it set for itself.

Grey’s Anatomy certainly isn’t known for its realism; no hospital witnesses as many life-altering disasters and miracle cases as Grey-Sloan Memorial, so it may not be the best place to go looking for an accurate portrayal of…anything, really. But there’s something to be said that the large ensemble of characters have tread around the issue for so long. Grey’s Anatomy is racially diverse in physical representation only, with narrative and storyline inclusion regarding race nearly non-existent.

One thought on “Interracial Relationships on ‘Grey’s Anatomy’”