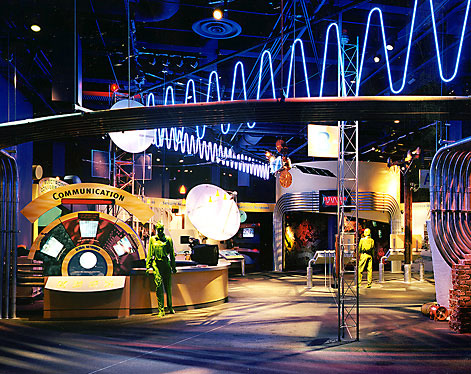 I never excelled at math. In fact, I distinctly remember getting a 40 on a pre-cal test on my 15th birthday and that was pretty much the worst. I was always good at science though, which kind of didn’t make any sense to me because I’d always equated math and science together, so it was confusing that I could be so good at science and be so consistently bad at math.

The difficult time I had in high school math ruined the entire subject for me. Math was just too hard and it wasn’t worth trying to figure out because I was convinced I wouldn’t be able to understand it and I was tired of humiliating myself with bad grades and wrong answers. That discouragement followed me until college and I avoided math like the plague. I applied to the communications department at UT because it didn’t require taking a math test prior to applying. I crafted my degree plan by tiptoeing around anything even sort of like math (looking at you, chemistry) because I had enough of it already.

Being bad at something, especially in school is discouraging. It makes you feel like a huge idiot, and it’s even worse if you have smart friends who are breezing through the stuff while you sit there lost and confused. And unless you’re lucky enough to have a teacher who encourages your success and growth, you eventually come to hate the subject that you don’t understand. You start believing you can’t understand it and you never will, and that thought hinders your ability to even try.

In 2012 I got an internship in digital development for President Obama’s re-election campaign and never have I felt more inspired. I didn’t know anything about digital development prior to this, but the team I was on was amazing and encouraged me to learn more and do more. It was the best job I ever had because of the people I was with, and inspired me to minor in computer science when I returned to school. The first class I took when I got back was one of the toughest courses I’d ever taken, but I’d just returned from helping re-elect our president using skills I had to learn on the fly, so I knew I could do it. I felt good about myself and the world of computer science fell open to me. The belief the campaign’s dev team had in me was intense and it fueled the remaining 2 years of undergrad for me. I believed in me because they did first.

Encouragement like that is important and necessary. Sometimes it’s been beaten into you that you can’t do something and it takes the reassurance from someone else that you can. And it’s really amazing how the outward support and resources can completely change how you feel about yourself. It’s usually not the sole answer, but it is an important step. I’m not a mathematician or anything now, but the support I got from the campaign was enough to change the way I approach problems I can’t immediately solve.

One of my favorite things about technology in general now is that it’s becoming more and more accessible. There’s tons and tons of websites and software and books and classes available to learn how to code and program, and it’s just amazing how easy it is to engage people in computer science. And what’s even better are the different initiatives there are to ensure that girls and kids of color are given an equal opportunity to excel in STEM fields as well.

Even though girls and boys perform equally in math and science in high school, and earn 50.3% of bachelors degrees in science and engineering, there’s still a huge gap that exists between men and women in STEM careers, with women being severely underrepresented at 29% in the science and engineering workforce. And factoring in race and socioeconomic status widens the gap even more. Women of color make up less than 10% of the STEM workforce with Black women at 3%.

These disparities don’t come out of thin air. Kids that grow up in poor neighborhoods are likely to go to schools that don’t have robust math and science programs, so they are denied the essential building blocks necessary for a career in STEM. Nearly one-third of students of color say they are interested in STEM careers, but they feel discouraged to pursue science and math. So it’s not like there’s a lack of interest in the subject. Much of the problem comes not only from lack of resources, but also from bias perpetuated by STEM institutions themselves. A 2012 study found that identical resumes with only gender changed favored the male applicant. “Faculty participants rated the male applicant as significantly more competent and hirable than the (identical) female applicant,” the study says. Not to mention proven hiring discrimination based on the race hiring managers assume from applicant’s names.

So where does this leave Black women and girls? There’s no cure-all for this issue, clearly. Sexism and racism can’t be solved overnight and hiring discrimination is intrinsically linked to them. But the spark in young kids exists regardless of what they look like or where they come from and as I’ve already discussed, encouragement and opportunity are hugely important.

Organizations like Black Girls Code and Girls Who Code offer a very important service to people who have been historically locked out of the STEM field and it’s really awesome to see. Free workshops and after-school programs that help and encourage girls to further explore the digital world are a wonder to behold. And watching programs like these take flight and gain notoriety, like BGC’s recent shoutout in an episode of Empire last week, is amazing. Google partnered with Black Girls Code, giving them a space in their Manhattan office in order to share their resources and create a pipeline between the two. More than 60 major technology companies, including AT&T and Adobe, have pledged to hire graduates of the Girls Who Code program. Jack Dorsey, co-founder and CEO of Twitter and Square called diversity in tech “critical” and applauded the organization for “empowering women to be the next generation of leaders in technology.” Seeing the impact these programs are having are really cool and it’s pretty awesome to watch them develop in real time.

I began volunteering in San Jose’s African-American Community Services Agency (which you probably know if you follow me on Twitter since I didn’t shut up about it.) I got to help a group of maybe 20 Black kids, mostly girls, build programs on their computers. It was just so fun and tugged a little at my heartstrings watching these kids learn how to make their computers do what they said and see how excited they were to advance to the next project and see their own success. I also began volunteering at The Tech Museum of Innovation, helping kids program robots, learn about encryption, and build their own computer networks. They’re just little kids, wearing sparkly pink boots and with enough energy to power a city, and they’re given these powerful tools that will help them succeed in technology.

I’m inspired by how much work goes into making sure that kids are given access to stuff like this and encouraged to learn because it’s so important. And, yeah, we’re not gonna eradicate racist and sexist hiring managers tomorrow. That sucks, for sure. But we can volunteer and encourage and inspire little kids who feel stuck.

I’m very motivated by the mountains of support I’ve been given to pursue technology, and I think it’s only right if I continue that train by supporting others. I wish I had fun games and puzzles and resources and museums and after-school programs that taught me how easy technology is, and it makes me just a tiny bit sad I didn’t have cool things like that to help me learn things I long thought were out of my grasp. But I gotta tell you, it’s a really cool feeling watching the faces of kids light up when their zombie robot finally raises its arms or their code runs successfully. It’s cheesy, for sure. But I’d be lying if I said I didn’t see that digital divide getting just a tiny bit smaller.