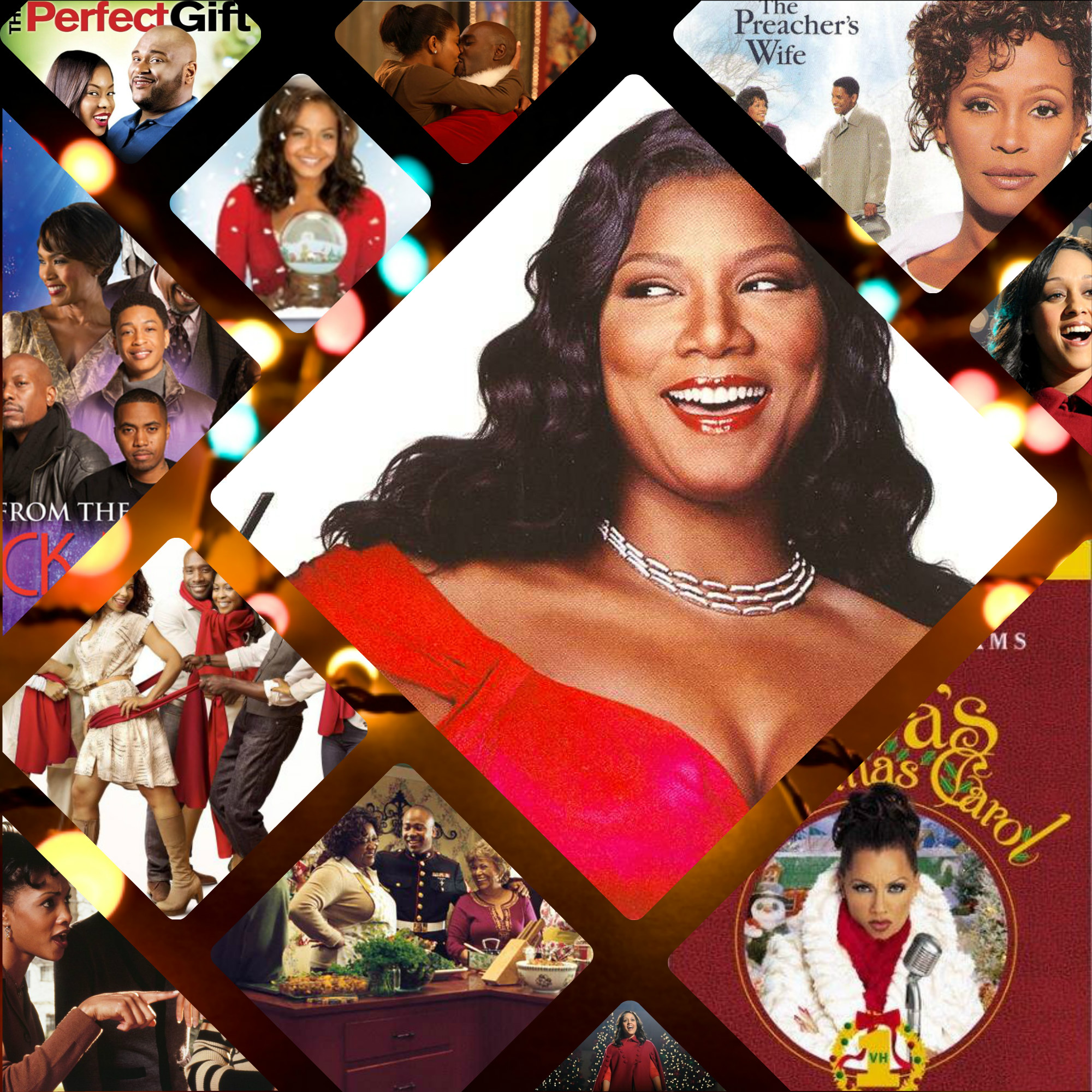 The Christmas movie market has been oversaturated for what feels like forever, ballooning as big as Santa’s own bag of gifts. Luckily for us, that means that there are plenty of Christmas movies featuring and starring Black people! There are so many new Black holiday masterpieces, like The Best Man Holiday and This Christmas and classics like Soul Food and The Preacher’s Wife. But, I wanna focus on lesser known films and TV movies, and the ones without Loretta Devine as the auntie or Tyler Perry in a dress.

As you know, I love Black women, so of course all of my favorite Christmas movies are those that display positive representations of us. And luckily there are soooooo many movies about the holidays that do just that. It may be an overlooked genre, probably since the only time people watch Christmas movies is during Christmas. But I’m thankful for these movies because there’s so many of them starring Black people and it just makes me feel good during the holidays. So, let’s get to it. Here are a few of the holiday movies I love the most!

As everyone knows, Vanessa Williams has been bae since day one. She’s amazing in everything she’s in, and A Diva’s Christmas Carol is no exception. If you haven’t already seen this movie, please do yourself a huge favor and watch it because it’s excellent.

Vanessa stars as Ebony Scrooge in this remake of A Christmas Carol, a cold-hearted pop singer who hates Christmas, because of course she does. She’s the Beyoncé of her former band Desire, leaving the girl group behind to find solo career glory. And it works because Ebony is one of the most successful singers out there and the fame and fortune go to her head, turning her into the titular diva. Similar to the classic tale before her, Ebony is greeted by her deceased former friend and band mate, Chilli of TLC, who tells her that loving Christmas is the only way that ghosts will not aggressively intrude on her life and make her pay for her sinful, Christmas-hating, diva ways. Of course, Ebony doesn’t listen, and ghost-Kathy Griffin along with some other ghosts invade her hotel room and take her on a journey that teaches her not to be so greedy and stop giving fake charity concerts that really line her own pockets. After a ghostly journey through the Christmas-version of her own life, Ebony learns not to hate the holidays or else she’ll die alone. Or something. There’s a message there. Mainly Vanessa Williams slays (sleighs?) every outfit she’s in and the songs in this movie are bangin.

There are probably a million A Christmas Carol remakes, but this is the only one featuring first Black Miss America, 80’s music hit maker, Grammy-Emmy-Tony nominated singer, actress, fashion designer, author, queen of the universe Vanessa Williams. This one is very obviously the best one, rivaling even Charles Dickens’s himself. Did he have Vanessa Williams in his book? No. He didn’t. The winner is obvious here, folks.

“Did you say skinny?”

Easily, the best line of the film is when Ebony calls Kathy Griffin a skinny bitch and she’s thrilled about being called skinny. It’s just a random non sequitur and a good representation of the humor in this movie.

Gotta be “Heartquake,” obviously. I mean, I just used a gif of it like 75 words ago. It was a toss up between this and the Sleigh Ride duet, but nothing can top “Heartquake.” Even though it isn’t a Christmas song, it’s the best in the movie; you just can’t beat it. Or the choreography. Or the hair. Or the outfits. Everything about this song is so hilarious and cheesy and perfect and I love it so much ok?

Ebony’s best outfit has gotta be that fluffy white coat with the red gloves, earmuffs and scarf that she wears in the poster of the movie and also while filming a music video in the film where she chokes on fake snow and immediately yells at everyone.

Unfortunately, this movie isn’t streaming online anywhere, but luckily for you, someone uploaded the entire thing on YouTube. And unless you’re like me and have it taped on a VHS, you can also buy it on Amazon for $13.99.

The pun wrapped up in this movie’s title should tell you all you need to know. The Mistle-Tones knows exactly what it’s about; corny holiday cheer mixed with Christmas tunes….eh, I mean tones. It’s an adorably cute movie starring Tia Mowry as Holly (because of course) and Tori Spelling as the bad guy. Finally, this 2012 TV special gives the evil white lady her comeuppance from a ragtag group of co-workers that look like the Rainbow Coalition. It’s even got Carl from Family Matters! What more could you ask for!?

One half of Sister, Sister, Tia as Holly traverses through this movie trying to find the true meaning of Christmas…through song! She’s the ultimate Christmas fan, and the props and wardrobe department do not let you forget it. Holly tries out for Tori Spelling’s wack Christmas singing group, the Snow Belles, that is somehow the greatest celebrity singing group in this little town, rewarded by singing at the “Deck the Mall” Christmas spectacular on Christmas Eve every year. Tori is jealous of Holly’s amazing singing voice and refuses to let her join, so she creates her own group with her friends at work called, you guessed it, The Mistle-Tones. The Tones, which they adorably call themselves, face adversity from every angle, from the Snow Belles always trying to one-up them, to their stickler boss kicking them out of the warehouse because he’ll be damned if he has to pay his singing employees overtime for practicing on work property. In between the singing and teamwork montages is a love story so predictable it hurts.

The plot is simple, the characters are easily recognizable, the music is surprisingly good, the humor is actually pretty hilarious, the puns are nonstop, and the cheesiness just oozes from every single line in this 90 minute cinematic masterpiece. I don’t care what anybody says, The Mistle-tones is a glorious, feel-good movie that’s perfect for the holidays.

“Oh yeah? Well then I guess I’m gonna have to tell everybody about Saint Nick.”

When Holly discovers her uptight boss, Nick, is actually a professional Christmas karaoke singer, she blackmails him after recording a highly embarrassing performance at the local karaoke bar, saying she’ll post the video unless he helps her budding group grow. The quote isn’t the funniest, but coupled with the literal blackmail subplot that is never discussed again and the inclusion of Nick’s stage name slash Christmas pun, it pretty much sums up the whole movie.

The music in The Mistle-tones was just hilarious, mostly because of the bad post-production synching. There are a lot of great…ugh, tones, in this movie, but my favorite was the 12 Days of Christmas montage, featuring both The Mistle-tones and the Snow Belles, mainly because the way they jazz up the classic song and make it their own. It’s just silly and fun.

Obviously, the best outfit was when The Mistle-tones auditioned for the Deck the Mall Christmas show (against heavy competition like the teeny bopper group Tinsel Tweens, shirtless Santa hat dudes the Chest-Notes, and Christmas rapper Ludakris Kringle) and wore matching outfits. The dresses and shoes were very adorable and bubbly and corny and represented everything this movie was.

Netflix is really messing up this year, because they took this cinematic Christmas miracle off their site. It’s an ABC original, which means you can find it on television this time of year, or you can buy it on iTunes for $5.99.

If there’s one thing you should know about me, it’s that I love Queen Latifah. To me, she is perfect. She can do know wrong. She’s a singer, rapper, actress, model, and probably will save the world one day. So it’s obvious I would put Last Holiday in the mix because this movie is fantastic.

The Queen herself stars as Georgia, a department store employee in the cookware section who’s a fantastic cook and loves Emeril. She’s shy and keeps her head down and gets all flustered when she sees her crush and co-worker Sean, played impeccably by LL Cool J. After a work-related injury (which Georgia is noticably NOT compensated for), she discovers she has the fictional Lampington’s disease, which means she has only 3 weeks to live. Great news to get right around the holidays. Georgia packs her stuff, cashes her savings, and buys a ticket to Prague where she plans to blow every last cent she has before she dies. She takes risks she never would have before, like snowboarding, gambling, and base jumping, unwinds with fancy massages, buys a ton of pricey clothes.

At the expensive hotel she stays at, she meets a group of filthy rich white people who are immediately intrigued by her buying like a grand worth of food in one sitting. They cozy up to her, wanting to know where her money is from and if they can become fake friends because all rich people are frauds. Georgia entertains the notion of having these white people follow her around and continues to enjoy herself, all the while LL searches for her and treks across the globe to find her. It’s sweet and adorable and ok, I admit, I cry at the same part every time.

Last Holiday is actually a quietly poignant movie because beneath the layers of Georgia spending every penny she’s ever earned, you periodically remember that she’s trying to break away from the quiet life she’s led and live loudly in her final days. There are a lot of sad undertones, and combined with beautiful scenery and landscapes that us mere peasants that aren’t dying in three weeks can only dream of, this movie is actually perfect for anyone feeling a little sad at the holidays. And if you’re like me and cry at any semblance of emotion, there’s that one scene that will definitely make you tear up.

At the movie’s climax, Georgia is finally making peace with her death, and it’s heartbreaking. The entire speech she gives to herself in the scene is touching and sad, but the best part comes at the end.

Unfortunately, Last Holiday is not a musical, which makes no sense. Queen Latifah is a great singer and rapper and LL Cool J is also a rapper, so we could’ve had a hip hop Christmas movie and it’s kinda not fair that that didn’t happen. While the soundtrack features great classic Black songs by the likes of Nina Simone, Isaac Hayes, and Marvin Gaye, we’re treated to a scene where Georgia is singing in her church choir about her woes, unbeknownst to the rest of the singers, and they join in thinking it’s a testament to the holy ghost. It’s kinda sad and kinda funny, but ultimately we get to hear Queen Latifah sing a little, so it’s all good.

Luckily, Last Holiday is everywhere! You can watch it on Netflix, Amazon video, and a handful of other streaming services.

These three movies are definitely not your typical Christmas movies or the most famous or popular ones, but they all hold a special place in my heart. From the multi-faceted display of Black women, both between and within all three, to the utmost corniness in all of them, this is exactly what Christmas means to me. Merry Christmas and Happy Holidays everybody!