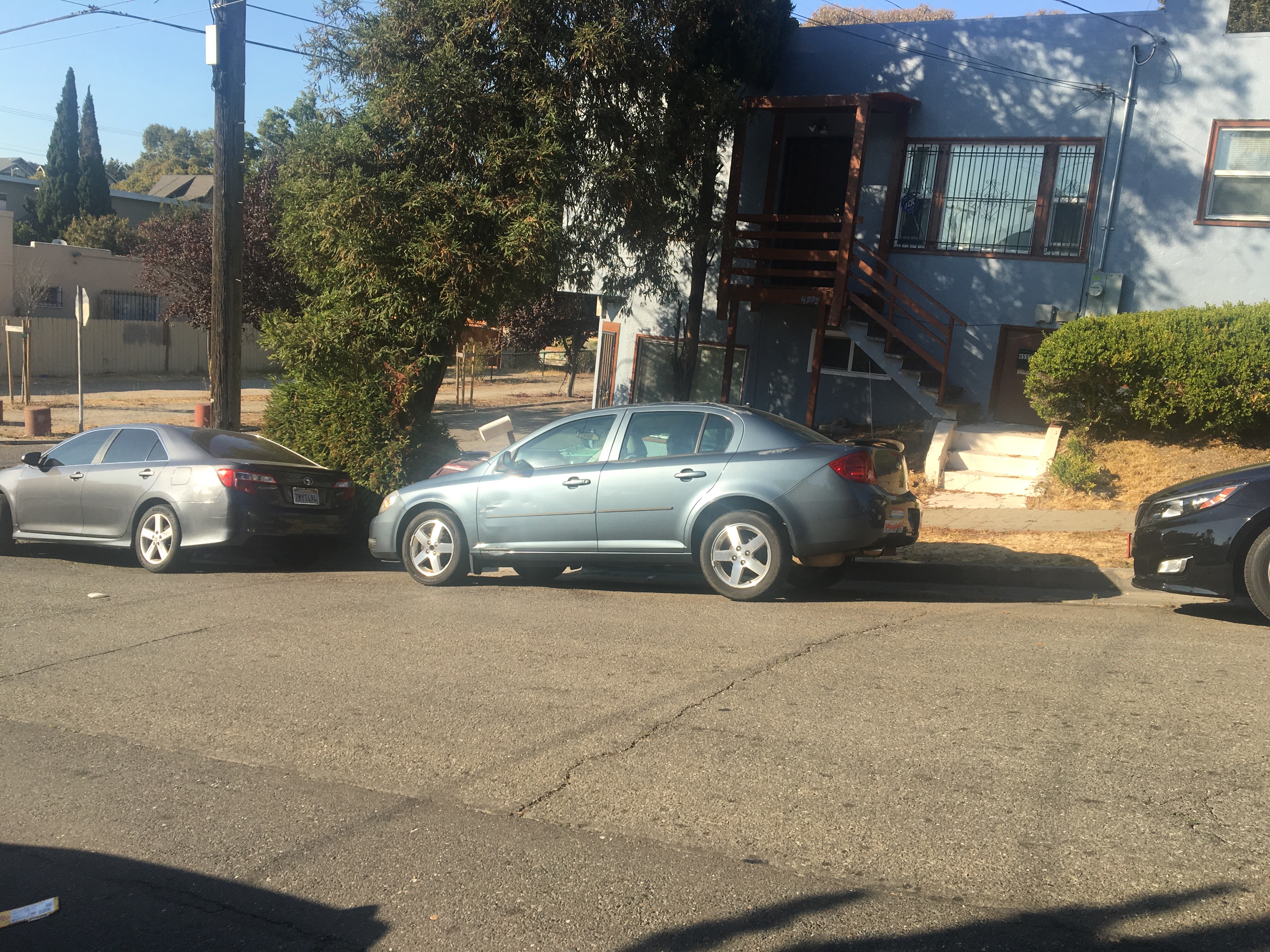 Oliver is the only man’ I’ve ever loved. He’s been with me through good times and bad. We met when I was 16. He was a bit younger than me, but he always got me through tough times. He’s aged a lot since then, and while he’s not as spry as he was nearly ten years ago, he still means so much to me. I’m talking, of course, about my car, Oliver.

I named Oliver after Oliver Wood from Harry Potter, naturally.

We got Oliver from a CarMax near my house in 2009. We looked at a bunch of other cars before settling on the 2005 Chevy Cobalt. It took us a while to find Oliver, but when we did, I was ecstatic. Not only was I getting a car, but I was getting a blue car. I wouldn’t have to ride the bus to school anymore. I could go places without asking for my parents to drive me. Getting Oliver symbolized freedom for me.

High school came and went, and college was next. It was the first time I was separated from Oliver since I’d gotten him. I moved into the dorms and left Oliver at home, electing to bypass paying for campus parking and taking the bus instead. But every time I went home, it was just like old times; just me and Oliver, heading to the grocery store or Target and doing errands together, or whatever 17 year olds did.

My second year of college, I’d had enough of being away from my beloved and we were reunited as I moved into a new dorm. I could explore Austin, drive my drunk friends home from parties, and could finally grocery shop with ease! Oliver really came through for me that year.

We went to Torchy’s Tacos and Gordoughs and Pluckers, and tons of other woefully unhealthy restaurants within driving distance of my school. We hung out with friends and sang along to the top of our lungs to the burned CDs I made because I’d be damned if I had to listen to radio edits or commercials.

He drove me between Houston and Austin when I wanted to visit home and kept me safe when I drove through what is certainly klan territory nestled in tiny towns between the two big cities. He drove me to the airport when I went to Chicago for President Obama’s inauguration party and didn’t even judge me when I got pulled over as I sped back to Austin the following night so I wouldn’t miss class the next day.

When I moved into an apartment with my friend my junior year, we were both psyched to have our own spot! No more looking for street parking and worrying that our parking permit wasn’t allowed on certain streets. My senior year, someone disrespected the sanctity of our special spot, parking there over the weekend. I left a note saying I’d call the tow company if they didn’t move, and after three days of finding street parking like some pled, I followed through with my threat and Oliver returned to his spot. We were both nervous the perpetrator would seek retaliation, but luckily the day never came.

Senior year brought a lot of fun memories with Oliver. Locking my keys in the car, Oliver displaying them right there on the driver’s seat as I stared longingly from the window outside. Learning to put air in his tires. Getting an oil change all by ourselves. Installing one new windshield wiper because I just assumed they came in packs of two (and, honestly, why don’t they?) and learning immediately that the singular wiper was entirely too big for Oliver to handle, nearly flying off upon first use.

He stayed with me through the two best friends I had and lost in college.

He was with me as I made new friends. He was with me when I graduated from college and was gifted a suped up audio system that let me connect my phone via bluetooth.

After I left school, he drove me to work at my dad’s office, which I desperately wanted to be rid of, so he drove me back up to Austin for job interviews and to hang out with friends when morale was low. And rejection after rejection, Oliver was always down to be fueled up and taken on the trek out to the city I thought I belonged in.

When I randomly and foolishly decided to move to California, he drove me and my mom and my sister all the way here over the course of 3 days. He even drove us to Disneyland for a pit stop. When I got to California and really settled in, realizing that I didn’t have a job or any semblance of a real plan, I fell back on Oliver. He drove me around doing DoorDash runs to deliver food and make extra cash.

My first friend in the state lived all the way in Santa Cruz and when Oliver and I first drove down highway 17, we were both taken very much by surprise. Oliver was getting older and his pickup was going south as well, so it made it hard for us to traipse the needlessly winding and terrifying road. Nevertheless, he persisted and we made it to the other side in one piece. The more we drove the route, the easier it got (I mean very, very slightly marginally a little tiny bit easier). Highway 17 is still very much horrifying and I hate it more than most things.

Halloween of 2016, Oliver was broken into. He was holding onto my favorite Gryffindor backpack and my laptop, my main medium for applying to jobs. We’d been in California for three months and got carjacked. It was pretty tough.

The next day, he drove me to LA to meet the cast of Grey’s Anatomy.

The day after, he drove me to the hospital when I thought I was going to kill myself.

After I got better, Oliver was there, waiting in the psych ward parking lot, there for me as always. We drove home in silence.

Despite going through a major setback, Oliver kept with me. We continued working for DoorDash and making ends meet by delivering the food and limiting our time talking to people. And one fateful day, as we sat outside an Armadillo Willy’s waiting for further instructions from DoorDash, I got a phone call offering me a job at the worst place in the world. I cried inside Oliver as we sat outside the restaurant, endlessly happy about finally having a job.

He drove me to and from my terrible job that tricked me and held me captive for a year and a half. At the top of 2017, I packed all my stuff inside of him for the second time and we moved to an absolutely awful apartment with 5 other roommates. Me and Oliver didn’t get an assigned parking spot, we rotated 2 spots between the 6 people in the place and we were not about that life. We lasted about a month there before I packed Oliver to the brim yet again and we moved to downtown San Jose in a teeny tiny overly expensive studio apartment.

Despite living a 20 minute walk from work, I usually drove, and Oliver never judged me for it. We didn’t have assigned parking again, but we did get a parking permit for the neighborhood and I’d reasoned that driving was a good idea to ensure that I wasn’t parked on the block during street sweeping.

My 3 parking tickets in the year and a half I lived in that apartment have proof to the contrary, clearly.

One day, I believe in November, I arrived at work to see that Oliver had been struck! I was already having a bad day, but seeing that someone had hit my car and didn’t have the decency to leave a note was enraging. I could see the red paint transfer in the dents on Oliver and obsessively surveyed every single red car that parked or drove past my block. And the jackass who hit my parked car like a goddamn idiot managed to misalign the door and allow juuuuust enough space that driving fast enough caused an annoying whistle of wind to enter the car.

And while I’m still mad at whoever hit my car and wish upon them a fiery death, that sideswipe made me realize that Oliver isn’t forever. It’d been 8 years since I first got him and he was 12 years old already. His paint had been starting to peel back for a few months and his brakes weren’t as sharp as they used to be. I didn’t want to admit that he wasn’t perfect anymore because he was still so perfect to me and for me. He kept me safe and enabled me to do so many things I needed and wanted to do; what would losing him mean?

Earlier this year, I finally got a real life grown up job that I like and am learning from and doesn’t fuel my depression and make me want to stab myself in the eyes. The only problem was it was an hour and a half away, in Oakland. And, for three months, Oliver and I made the trek, nearly two hours each way, every weekday. We listened to long ass playlists and podcasts and jammed out because how else does one get through Bay Area traffic? In August, I packed Oliver up for the third time since I’d moved to the West Coast and we moved to Oakland. He was stuffed fuller than ever before, the belongings I’d collected since living here spilling over into the driver’s seat and even into a Uhaul van. I managed to move into a new house, just Oliver and me, and a Uhaul to help with the bigger stuff.

We don’t have assigned parking here. We live on a hill and sometimes I have to use my handbrake out of fear that Oliver will roll away and probably because that’s what you’re supposed to do on an incline (no one ever taught me, Texas is flat, and I’m too nervous to look it up). The longer we live here, the more we’re used to steep grades, even getting parallel parking down, mostly!

I dropped nearly $500 on Oliver a few weeks ago, after his back wheel started making crazy sounds and making everything lopsided. It reminded me again that this car is not forever. And while that makes me so sad, because Oliver has been with me for so long, through so much of my life, I realize that he’s not meant to last forever.

And, yeah, it may be silly for me to write nearly two thousand words about my car, but I have thousands of memories with him and thousands of reasons to be thankful.