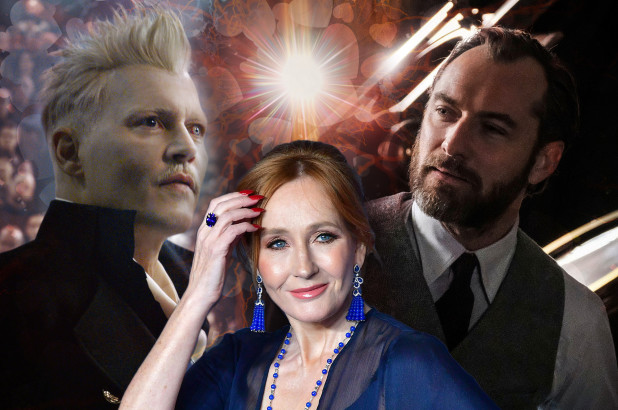 Listen. I went to see Harry Potter and the Deathly Hallows Pt. 2 in full Gryffindor robes. There’s photographic evidence of this occurrence. I joined the Harry Potter Alliance in college. I got a complete wand and wand-care kit from online shop Alivans in like 2004, before Pottermore was even dreamed up and Harry Potter World sold replicas of main characters’ wands. I posted to Mugglenet everyday after school as a kid. I went to Harry Potter book releases at Barnes and Noble and have a vivid memory from 2003 of standing in line with anticipation and excitement only to receive an 800 page book that I definitely was not gonna finish before school the next morning.

I stood on the red carpet at the Harry Potter and the Deathly Hallows Pt. 2 NYC premiere.

I’m a Harry Potter fan through and through. So much of my childhood, like so many literally millions of others’, hinges on the story of the boy who lived. I could write novels describing how crushed I was when I didn’t get my Hogwarts acceptance letter when I turned 11, and how I chalked it up to having a birthday on September 2, the day after the Hogwarts Express leaves, and reasoning with myself that it’d just take another year, only to be denied a letter for a second time, and express my undying, spiraling rage at being TWICE denied entry into the only place I felt would ever truly accept me.

Um. Ok, right, yeah. Harry Potter. I LOVE Harry Potter. I love it. It’s a core part of my being. I literally do not know who I would be without it. It’s like someone incarcerous’d Harry Potter to my DNA. I’m 26 now and, yeah, I don’t regularly wear my house robes like I did as a kid, opting for subtler, more chic Harry Potter-esque regalia now (looking at you, BoxLunch), but it’s still such an integral part of who I am.

Which is why I’m here to publicly plead with J.K. Rowling to STOP.

For the love of Ariana Dumbledore, woman. Get a goddamn grip. This constant need to reveal details of the series that we should’ve ~*known all along*~ through context clues and secret code and just looking hard enough and, I don’t know, like some kind of Goonies-like trek through the subtleties of the text and the movies has been a decade-long joke on us all. Every time we, the general public, are just minding our business, not even doing anything remotely Harry Potter related, Jo springs yet another *obvious* fact on us that appears nowhere in the books or the movies.

Dumbledore’s gay! Hermione is a woman of color! Hagrid is dyslexic! Diversity! Everyone wins!

Harry Potter gets to be chock full of diversity without actually having any diversity. Jo has been pulling this since 2007 when she decided to out Dumbledore to a random kid who asked her a question. People celebrated her back then because it seemed the perfect cornerstone to recent domestic partnership legislation and civil union laws (and probably because Twitter wasn’t in cancel-mode yet). I remember hearing the news about it and being excited and confused because, as a budding gay myself, I didn’t remember anything in the books detailing the headmaster as such. But, I thought, being only like 13 at the time, maybe I overlooked it.

Back then, in 2007, Rowling described Potter as a “prolonged argument for tolerance.” Prolonged indeed.

It’s been nearly a decade since Harry Potter and the Deathly Hallows was published. Never did Rowling write, not once, that Dumbledore, nor any other character in the Potterverse was queer. Yet, years after the fact, nearly a decade, as the embarrassingly cringey Fantastic Beasts is taking helm, we get details of the sex life of the gay wizards?

Joanne. Please. Do us all a favor and keep a lid on it, huh?

Here’s the quote in its entirety from RadioTimes:

“Their relationship was incredibly intense.

It was passionate, and it was a love relationship. But as happens in any relationship, gay or straight or whatever label we want to put on it, one never knows really what the other person is feeling. You can’t know, you can believe you know.

So I’m less interested in the sexual side – though I believe there is a sexual dimension to this relationship – than I am in the sense of the emotions they felt for each other, which ultimately is the most fascinating thing about all human relationships.”

“It was a love relationship.”

Anyway, back on topic. I have SEVERAL questions for Joanne. SEVERAL.

First, when you say “Dumbledore’s gay” what do you mean? Scratch that; what do you think “gay” means? Were we supposed to assume that because this is a kid’s book there’s no whoopie happening? We get a whole epilogue full of Potter-Weasley/Weasley-Granger DNA, so we know these characters are doing the do. But, “gay” here initially meant that Dumbledore has crushes on boys and that’s it? I’m confused why Jo thought it was necessary to point out that there was a “sexual dimension” (don’t even want to delve into this language) to their relationship when she told us like NINE YEARS AGO that Dumbledore was gay. Does J.K. think gays just hold hands and take cute Instagrams? I mean, does she think that’s all gays do?

First of all, amidst the vast, sprawling, nuanced, creative, unique world that J.K. Rowling created, NO ONE was wondering about Dumbledore’s sex life. NO ONE. NOT ONE PERSON. NOBODY. N O👏🏾O N E👏🏾. So, this was absolutely the last thing we needed to hear.

What about the marauders, Jo? What about their backstory? How do owls always find the recipient of their letters? What happens when Ravenclaws got back to their dorm drunk at 4am and can’t answer the riddle to get in their dorm room? Where did Molly Weasley get that kid tracker clock? Do other wizards have them? Can I have one?

These are questions we want answers too, not how intensely sexual the relationship between Dumbledore and Grindelwald was. What is even happening here? Why am I writing about this? When will Joanne own up to these crimes?

I’ll give it to you straight. I haven’t seen Fantastic Beasts and Where to Find Them: The Crimes of Grindelwald. Can you imagine me saying that to the teenager working at the ticket booth? That entire paragraph length movie title? Starring Johnny Depp? Over my dead body. I’ve read about it on Twitter, which is practically the same thing, and the internet reports that there’s no gay mention in the movie, which means J.K. Rowling is pulling another one over us just like she did not too long ago; posthumously offering details while omitting them from the canon material.

It’s wrong. It doesn’t make any sense. Anyone can write fan fiction, which is effectively what Jo is doing, since nothing she has said about Dumbledore’s sexuality has been put to paper or filmed on camera. Her words mean nothing, and she knows it. We all know it.

Nothing she says actually matters. It trends on Twitter, sure, and we all make absolutely hilarious jokes about it until something more interesting comes along. But Jo’s diversity hire additions after the fact don’t have any effect on how the characters in the fictional world operate because they’re just fodder for the cameras and filler for blogs like this one.

And in a series as important as Harry Potter, a series that showed us to root for the underdog, the little guy, the band of misfits, the one that doesn’t fit in, the chosen one who didn’t want to be; in a series that asks us to be brave and stand true, everything J.K. Rowling does in front of cameras and in interviews and for DVD behind-the-scenes bits doesn’t matter. The representation she posits inside the Potterverse is only illuminated under the spell Rowling casts in interviews that never make it on screen or in the books. Until she puts these “intense” details in her books and movies, she may as well deposit these details in a pensieve.

You can’t just add extraneous details like this in an interview after the fact. It doesn’t count. And yet, Joanne keeps playing this game with us. We’re expected to accept this extraneous addition to the series without real work being done.

It’s easy to make things up for a world you created in your own head. Perhaps J.K. Rowling has always intended for Dumbledore to be gay, to have always had a relationship with a “sexual dimension” (christ) with Grindelwald. But she doesn’t say it, she doesn’t say any of it. Instead, she tosses us a bone every ten years with some tiny nugget of information that alludes that probably, maybe, Dumbledore might be a homo.

Perhaps we should’ve examined “J.K.” as more than just her initials.

So. Is J.K. Rowling ruining Harry Potter with post-book trivia? I’d answer a resounding hell yes. She’s ruining everything. She’s retroactively ruining my childhood, one I could’ve really used gay representation in to help me find my truth faster, along with opening up that perspective to millions of other gay children, and children that would grow up to have gay children, or legislate the rights of gay people. She can’t have it both ways, boasting representation in the franchise without actually doing the work. It’s offensive and it’s cruel to say the least.

My advice is that, as the producer of the, and I can’t believe I’m saying this, FIVE Fantastic Beasts movies, instruct the writers to actually write in that Dumbledore is gay. No fleeting, obscure detail or secret code or wink and nod at the end where we’re supposed to “get it.” She’s been stringing us along for nearly a decade. She owes us this much. Either make Dumbledore gay or stop gabbing after the fact. And no, we don’t need a gay sex scene or whatever Joanne was envisioning when she came up with “sexual dimension” as a real thing to say about a character in a children’s book. There’s hundreds of ways that Dumbledore can be characterized as gay that don’t have to do with his sexual relationships, and if J.K. Rowling can do the work of figuring those out, maybe she’ll be able to salvage this whole thing.

So, what do you think? Is J.K. Rowling tarnishing her legacy with this nonsense? Let’s discuss.