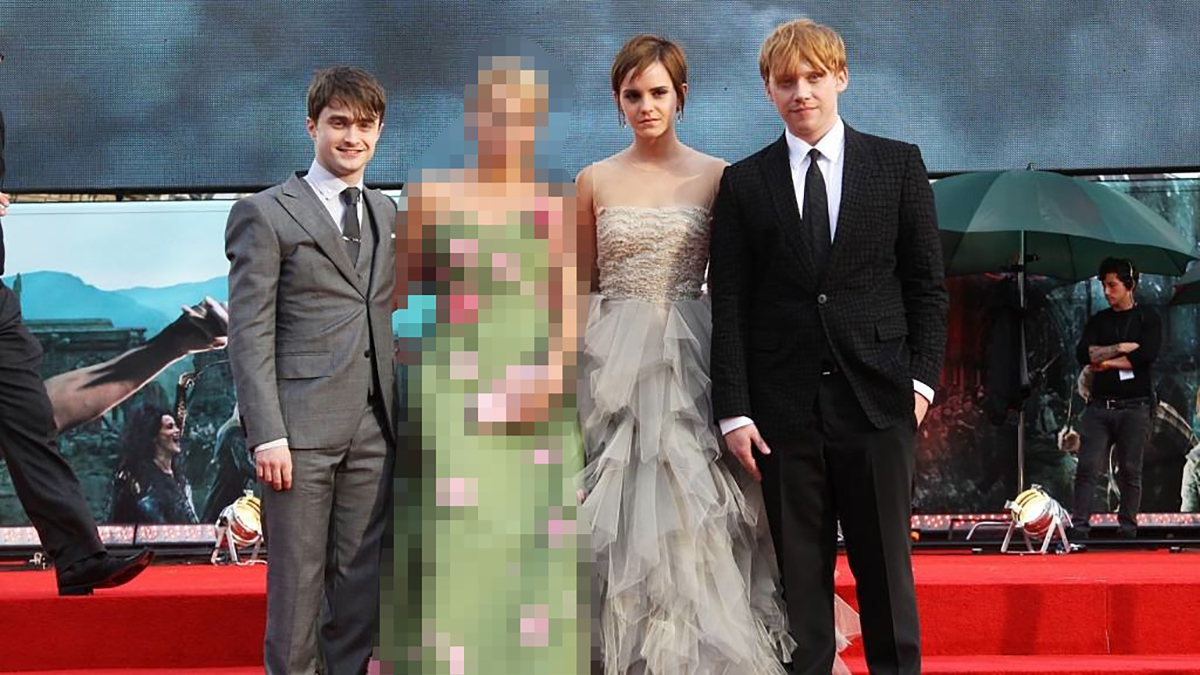 Look, I’m not gonna say her name. You’ve seen the tweets, you saw my funny title that forced me to capitalize “white” which I begrudgingly did in service of a dumb joke. You know who I’m talking about.

She’s a damn disgrace. What an absolute moron. It cannot be stressed enough what a huge, huge dummy she is. And the most annoying part is that she’s yet another white woman with bigoted opinions, which is nothing new, and the only reason we’re paying her any attention is because of her very loose affiliation with the Harry Potter franchise.

This dumb rich white lady really believes TERF is a slur, just like how some other white woman tried to say “Karen” is a slur for white women. Why? Because white women want to be oppressed so bad, they’ll turn to Twitter to make themselves look like huge idiots and jump through hoop after hoop to play the victim. They hold onto their womanhood with everything they have and use it as their one calling card to make the world come to a halt and feel bad for them and how oppressed they are. It’s truly embarrassing. Why not just sit up in your rich people house with your rich people things and keep that rich person mouth all the way shut?

I know that’s a lot to ask from You-Know-Who, cus she has been popping off at the mouth for literal years. All of a sudden, Dumbledore is gay because…*checks notes*…he wrote letters to Grindlewald when they were being young nazis together. (Yet somehow Scorpius Malfoy and Albus Potter are not gay for each other? I saw Harry Potter and the Cursed Child, and it’s homophobic that they are canonically straight, because they were so clearly gay.) And, oh wow, turns out maybe Hermione was Black all along because…she had brown eyes and curly hair? And the random factoids and desperate grasps at inclusion a decade after the last Harry Potter book was published don’t end there. Why put all that diversity stuff in the book when years later, you can just tweet that it was true all along and it was us, the readers, who were the true bigots for not reading between the lines!?

And as white women are wont to do, she doubled (actually, given the length of that god awful transphobic manifesto, quadrupled) down on her bad opinion, even after being given overwhelming evidence that she’s being harmful, transphobic, and overall a horrible and evil, evil person. But, wait! She has…give me a moment…ah yes, according to yet another one of her tweets, she has a lesbian friend! Yes, you heard it here folks, she has a LESBIAN FRIEND! Her transphobia is eradicated! The thousands and thousands of trans and queer people calling her out for VICIOUS TRANSPHOBIA are no match for her unnamed BUTCH LESBIAN FRIEND. So you see everyone, it’s fine! Show’s over! This is totally not yet another step in the white woman handbook of taking zero accountability for their harmful and bigoted actions, right after sticking their fingers in their ears and screaming so they can’t hear literally everyone else telling them how wrong they are. It’s all fine!

Do you know how stubborn you have to be to have hundreds of thousands of people telling you how wrong you are and how hurtful your comments are, and still have the audacity to not only make the entire situation about you, but refuse to listen to anyone else?

Even after several👏🏾of👏🏾your👏🏾most👏🏾influential👏🏾colleagues call you out, you turn to the internet, mute your naysayers online, and write a Harry Potter chapter-length essay on your website about how much of a dumb bigot you are. Why you ask?

Because this HUGE DUMMY is the exact same as every single other annoying, dumb, bigoted, self-righteous, ignorant, stubborn, hurtful, hateful white woman with zero self-awareness who goes on the internet and plays the victim in a situation that has nothing to do with them.

She’s just another D U M B boring white woman with dumb boring opinions, and a thesaurus.

I’ve been an Harry Potter fan since I was 9. I went to midnight book release parties, went to every midnight movie release since Goblet of Fire, bought Gryffindor robes, read Mugglenet daily, faked sick so I could leave class early to hop on Pottermore when it was released, faked healthy when I actually was sick so I could enjoy my Harry Potter World trip, went to the Deathly Hallows Part 2 NYC premiere, joined Harry Potter fan clubs, spent who even knows how much coin on Harry Potter merch. Harry Potter has been my lifeblood for the majority of my life.

To say I’m disappointed would be an understatement. I’m not disappointed, I’m furious. I’m furious that She-Who-Must-Not-Be-Named is using her power and privilege to continually oppress a marginalized group of people, and have the audacity to stand her ground, bully people on the internet, and spew her transphobia for the entire world to see, and be so bold and blatant with her wrongness.

Seems very peculiar that she’s popping up unasked and using this time to be transphobic when the entire world is engaged in a historic civil rights movement focused on dismantling racism and police brutality against Black people. With protests in all 50 states in America and 18 other countries, including the UK where this terrible person is from, maybe she decided she needed to make this historic moment about herself. Maybe she’s getting lonely in her rich people house and needed some attention, so decided, while having absolutely nothing to say about #BlackLivesMatter, that she should use some casual transphobia to divert attention away from her own racism. Is it a cover up? Does this woman support the police and hate Black people? I think I’ve cracked the case. She hates Black people, confirmed.

If she’s allowed to say bullshit with 0 evidence, then so am I.

Yeah, I said witch. She can cry about it. Accio a tissue or something.