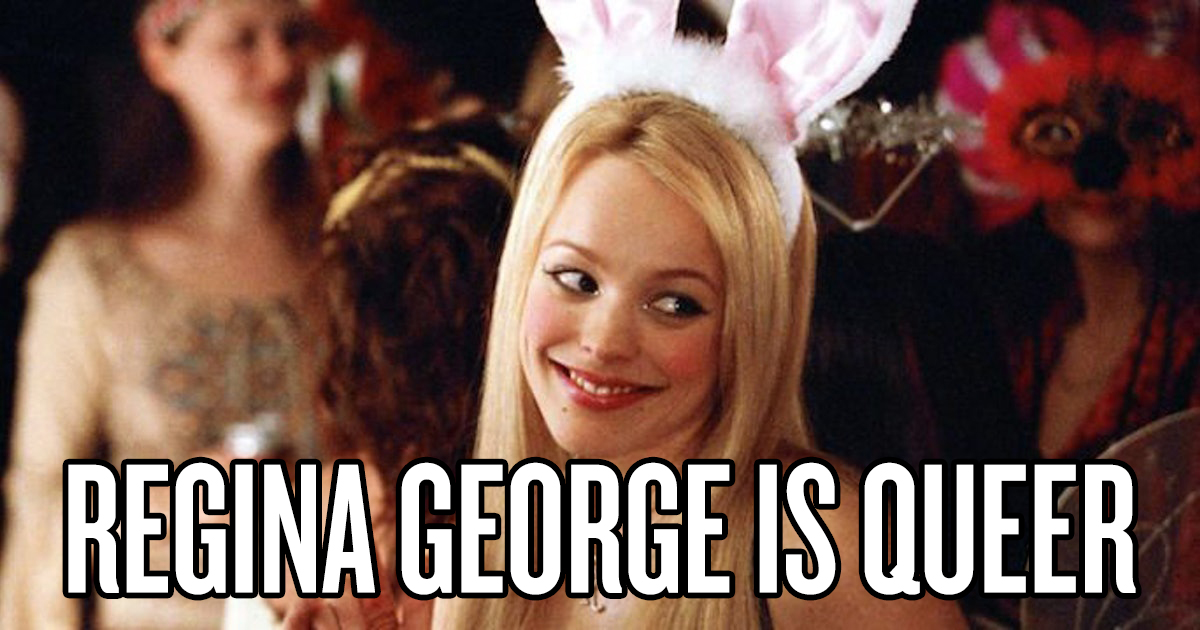 Mean Girls came out in 2004, which is so hard to believe because it remains so ingrained in pop culture and absolutely iconic nearly 20 years later…which, yes, that makes me feel hella old, so let’s just move on.

While the movie purports to be about Cady’s journey from outcast to Mean Girl to Regular Girl, the real star of the show is Queen Bee herself Regina George. She’s vicious, a fashion icon, stupid rich, and also a closeted queer girl. And I have proof.

As the leader of The Plastics, she has an image she needs to uphold: the popular, beautiful “It” girl with the hottest guy as her boyfriend. There’s no room for her to be queer, especially if she wants to keep her social standing. In addition, this was 2004. Gay marriage was still over a decade from being legalized in America, and Buffy the Vampire Slayer had just killed off one of their only lesbian characters the year prior. Needless to say, it wasn’t an awesome time to be a lesbian.

The evidence shows itself in Regina’s attraction to Cady: “You’re, like, really pretty.” Sure, girls call each other pretty all the time, and Regina was certainly using this moment to manipulate Cady into being her friend, but I’d argue this was due to Regina’s inability to handle her own feelings. As psychotic as this child is, there are multiple instances of Regina covering up her attraction to girls with manipulative and aggressive behavior, and this is the first example.

Regina tries to integrate Cady in to friend group after forcing her to sit with The Plastics at lunch. She vies for Cady’s attention, while at the same time provoking her and antagonizing her. Regina confuses her with backhanded compliments while also attempting to recruit her into her friend group. When Cady visits Regina’s house, The Plastics revisit their Burn Book, the key plot device of the movie. The Burn Book was created to trash talk other girls in the school, and the girls look through some of the comments they’d written, including one about Janis Ian being a “dyke.”

Regina was the HBIC; her entire personality up until this point was vindictive asshole high school queen. The Burn Book was almost certainly her idea. And the comments written inside were all about girls, mostly about what they looked like and who they were dating or hooking up with. And, sure, those are pretty typical topics for high school girl gossip, but it’s also indicative of how attentive Regina is to the girls in her school.

After learning that Cady is into Aaron Samuels, Regina dangles him in front of her and uses the knowledge that Cady likes him to her advantage. She manipulates both Aaron and Cady in order to get what she wants. After getting back together with Aaron, she uses him to torment Cady, again using classic bullying tactics to cover up how she feels. She wants Cady’s attention, and knowingly uses Aaron to get it. The couple is distant when they eat lunch together, but as soon as Regina sees Cady, she makes sure to become visibly affectionate and touchy with Aaron, giving us the iconic “your hair looks sexy pushed back” line.

While at the mall, Regina gives Cady another iconic speech about how she and Janis were best friends in middle school, but she had to stop being friends with her because she thought Janis was a lesbian. Later in the movie when the girls are giving apologies to each other in the gym, once it’s Janis’s turn, Regina says “it’s her dream come true, diving into a big pile of girls.” The whole reason Janis wanted to set up the entire revenge plot to sabotage Regina and the Plastics in the first place is because Regina started a rumor that Janis is gay. High school aged Regina is already emotionally stunted as it is, so we can assume that middle school Regina would only be worse. And her gay panic response to any inkling that she might be queer was to point the finger elsewhere, deciding the cost of losing her best friend outweighed the idea and possible insinuation that she herself might be gay.

Mean Girls‘s entire story arc is set into motion because of a rumor that a North Shore High student is a lesbian. Obviously being queer in high school is hard, and we see in the film that gay students rank low on the social ladder. Damian, who is confirmed to be gay, is considered a social outcast, from being considered an “art freak” by the Plastics and to getting a shoe thrown at him at the Winter Talent Show. And while Damian doesn’t seem to care much about fitting in with his peers, he’s still treated differently by them. Social status is everything at this school, and being gay puts you at the bottom of the power structure.

Which is why Regina deflects attention from her own budding queerness.

She’s overly interested in and judgmental of the lives of the girls at her school, she uses boys to manipulate her girl friends and make them jealous, and she starts rumors about other girls being gay to avoid suspicion that she might be the gay one. She performs heterosexuality and uses aggression toward her peers to maintain her cover. Regina’s rules for The Plastics (wearing pink on Wednesdays, no jeans, etc.) and the hottest guy in school on her arm help maintain her image of hyper-feminine popular girly-girl, and throws suspicion off the fact that she might not be like everyone else. She used Janis as a scapegoat because she knows how to work the power system in school; if she starts a rumor that Janis is a lesbian, it flips all that attention onto Janis and puts Regina in the clear.

Despite the fact that The Plastics have always been a tight-knit 3-girl act, Regina instantly latches onto Cady to keep her close, and uses her boyfriend to make her jealous. She inducts Cady into her friend group, and immediately starts disparaging her. She doesn’t know how to manage her crush on Cady, and reverts to the same tactics she used when she was best friends with Janis, and tactics she’s come to perfect as she’s gotten older: manipulating and antagonizing her friend to avoid figuring out her own feelings.

Regina is a mean girl who is struggling to accept her queerness and uses aggression, manipulation, and straight-up bullying to avoid dealing with the possibility that she is queer. Whether or not she’s a lesbian specifically, I’m not entirely sure. Despite using guys at her school as props and tools of manipulation, there are moments where she seems to genuinely enjoy them. And if Regina doesn’t have the mental and emotional capacity to even admit her feelings for girls to herself, she’s far, far away from exploring being bi or pansexual.

And–let’s not forget who ends up in a big pile of girls at the end of the film.

So, there you have it. Undeniable, unavoidable, 100% guaranteed proof that Regina George is queer. Happy Pride Month everybody!