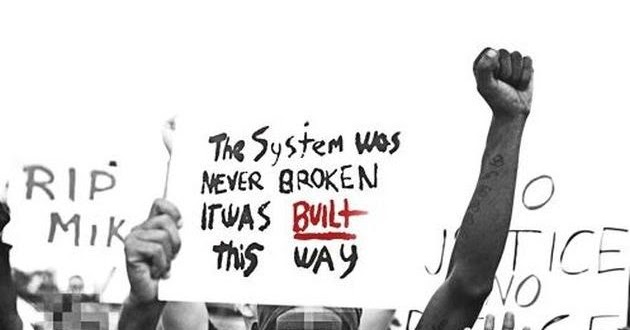 I’m starting to forget the names-turned-hashtags of Black people who were extrajudicially murdered. I’m forgetting which city they were in and I have trouble keeping straight which name goes with which killing. I forget details, or match them up wrong. It’s getting to be too much. It’s always been too much.

I get nervous when my phone storage is full because I need the space just in case I have to record the police. I’m considering getting a new phone with more space solely for this purpose.

When I’m walking and I see police, I take my hands out of my pockets and I make sure to only look at them once or twice, and not turn and look at them after I pass by. I try not to walk too quickly, or too slowly. I feel my heart rate shoot up and I hope it’s not too visible how nervous I am.

I hate driving because I’m scared that I’ll get pulled over. I’m scared of getting into an accident because the other person might call the police. I don’t speed if I can help it because I don’t want cops to have any reason to stop me.

I have this feeling far too frequently. I can’t explain it well. If you’re Black, you know what I mean. It’s hopelessness and fear and rage and numbness, all mixed together. It’s an empty feeling. It’s bottomless. I wish I could describe it in words, but I can’t. How can I explain the helplessness that comes with being in perpetual fear of your life?

I think this feeling gets subdued inside of me a lot. I’m not always at this level of anger. Part of it is that I’m a part of the problem; the weeks after the hashtag stops trending, it’s not fresh on my mind anymore. I don’t forget, but I just don’t think about it. I stop fighting. I fall into a false sense of security and revert to tweeting funny gifs and joking around. And then it happens again; the police kill yet another Black person. The other part of that restrained fury is that I can’t exist feeling like this. It is draining. It’s depressing. I can’t feel this powerless all the time. I can’t feel this hopeless. I can’t do it.

There’s no one stronger than Black people. We’re being murdered in the streets by cops playing judge, jury, and executioner, and we’re still expected to keep our rage to ourselves. We’re slaughtered, everyday, and we have to maintain decorum, lest we be unprofessional at work or inappropriate in public. Can you imagine being bombarded with images of your people, people who look just like you and the ones you love, being summarily executed while you’re subsequently expected to stay quiet about it? Fearing for your life day in and day out because you know it could be you next, yet conditioned to remain silent? It’s near impossible, but we do it. We don’t really have a choice sometimes.

Our rage is silenced. We’re killed, and told to be quiet. We can’t be victims because we’re thugs first. We’re violent first, we’re aggressive first, we charged first. We made the officer fear for their lives. We had sagging pants and timbs, and Black skin. We have to prove our innocence after we’ve been killed. Our killers get a slap on the wrist, if that, and America wonders why we don’t stand for the pledge.

On the days of and after yet another Black person is murdered by the cops, I desperately seek out other Black people. I want to look at them, and for them to look at me. I need that quiet affirmation that we both are going through this national heartache and we’re feeling the same. I need that connection with people that get it. If I can’t access any of my friends in person, then I seek it in anyone I see, be it a stranger on the train or somebody in the grocery store. I don’t care. It’s like a quiet intimacy; we’re both suffering from this silent war and no one else really understands how much it hurts.

There’s not much more I can write that someone else hasn’t already said. Black people in this country are tired. It is debilitating to go through this. It is paralyzing. It is terrifying. It is absolutely harrowing.

Racism is so deeply and complexly interwoven in this country that I can’t see any semblance of a solution. I don’t see an end in sight. I’m not hopeful. I can’t figure out what we can do to make this stop. It seems pointless. There’s no cure-all. I don’t know what to do.

What else can we do to “raise awareness” or whatever? Brilliant people have heavily documented each and every case of these racist government-sanctioned executions, detailing everything with indisputable proof of this systematic process of unjustifiable murder. People share colorful infographics of how many Black people have been killed since Trayvon, since Mike, since Eric, since Rekia, since Alton, since Sandra. Musicians make songs specifically calling for police to stop shooting us. There are public databases of police contracts for better accountability. There are protests every single day.

Still, white people blame us for our own deaths. Still, they dig up our 4th grade report card and our parking ticket from 15 years ago and our family’s entire history of any confrontation with the law. It’s our fault that we’re being murdered. We’re to blame.

What more can we do?

I’ve had stress dreams about being killed by cops for years. I think about it all the time. Sometimes I even get sad because I have a hyphenated last name and it makes me think that my name is too long to be a hashtag. I think about the stuff I’ve posted on Twitter and Facebook and I think about which is the most damning picture the media could use of me, or posts or tweets I’ve put online that could be used to argue that my murder was my fault. I think about stuff I’ve written on here and elsewhere and how easy it would be to make me seem villainous, deserving of death, for speaking out. It would be so easy.

I don’t want to listen to people telling me I wasn’t there, or that the cop feared for their life, or anything about the Black-on-Black crime myth, or the victim was to blame because they were resisting arrest, or they didn’t have their hands up, or they were reaching for a gun that wasn’t there. I am sick to death having to defend my own humanity. I don’t have the patience for these arguments. I don’t care about your feelings when people are being murdered for no reason.

One thought on “Quiet Rage”