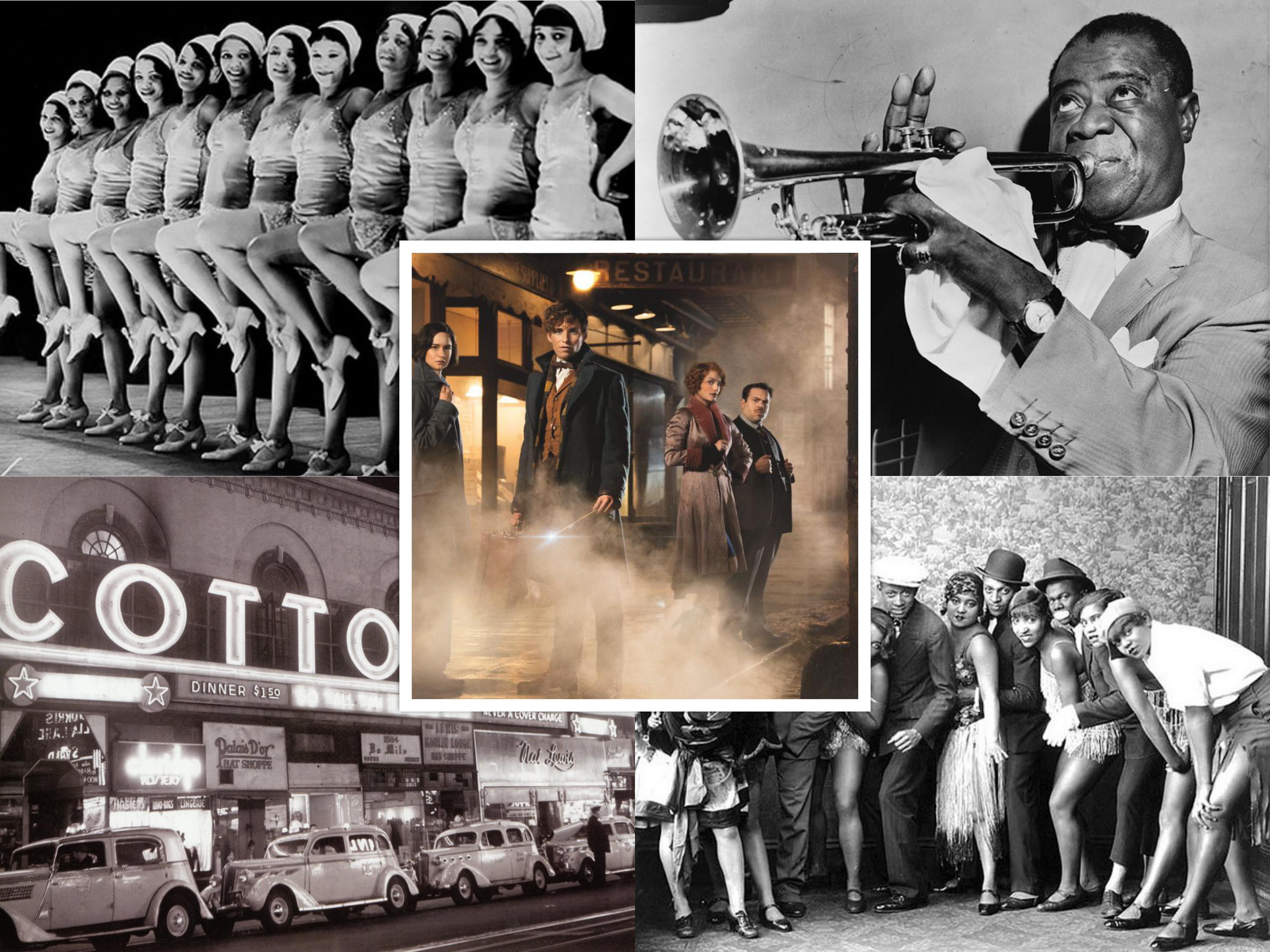 I had a really awesome Thanksgiving. My two best friends and I spent the week together and it’s probably been the most fun I’ve had since I moved out to California. And although I’ve been missing my family a lot lately, seeing my friends was incredibly uplifting.

On Thanksgiving day, we went out to the movies to see Fantastic Beasts and Where to Find Them. I haven’t been thrilled about seeing it for a multitude of different reasons. From setting a movie in 1920’s New York with an alarming lack of people of color to the fact that they picked the most boring topic in the Harry Potter universe to make five movies about, I just wasn’t excited to see it. But we did anyway because nothing else was open and we didn’t want to laze around the house all day (just some of the day.)

Fantastic Beasts wasn’t a terrible movie. It was entertaining enough and the few Harry Potter easter eggs and jokes thrown in were appreciated. Overall however, I feel exactly the same about it as I did before I saw it. I didn’t have high expectations and it still managed to disappoint me. I knew not to expect much, especially in the way of Harry Potter-level excitement. But even though I wasn’t hype about it, I still wound up feeling like something was missing; a lot of something.

Like a billion other people, I’m a huge Harry Potter fan. I remember my dad reading Sorcerer’s Stone to me when I was 7 and when I got to go to my first midnight book release (Goblet of Fire) and my first midnight movie release (also Goblet of Fire) and getting in trouble for reading Deathly Hallows in summer school geometry class and going to see Deathly Hallows Part 2 twelve times in the theaters (the one movie that was still in theaters on my birthday) and skipping class when I got into the beta for Pottermore. Harry Potter has been a huge part of my life literally since I can remember. It helped me learn how to read and to enjoy reading. It’s given me so many amazing and wonderful friends. It’s shaped my entire life, really, and I don’t know where I would be without it. I realize that’s a very typical thing for someone my age to say, but it’s true. I grew up on Harry Potter like millions and millions of other kids and its legacy is a lasting one.

So imagine my surprise at myself when I was disinterested in seeing Fantastic Beasts.

It should’ve been something I jumped to watch and read and absorb every droplet of information possible; it’s what I used to do for every Harry Potter related thing before. But as more and more details about the movie came out, I just felt my ability to care about it shrink. I just had no desire to go see it. The premise just felt lacking to me, and the movie supported that initial thought. There’s so many more intricate and interesting stories in J.K. Rowling’s wizarding world, and yet I feel like we got one of the most boring ones. A movie about the MCUSA (Magical Congress of the United States of America) and Grindelwald’s infiltration of it would’ve been far more enticing. As many Harry Potter fans have brought up, more background and depth about the Marauders would have added extra context to the Harry Potter series itself and been explosively entertaining, not to mention it would include characters we already know and love. Imagine watching a strong friendship between the four, knowing that one would eventually betray the others. The idea is somber and a bit haunting, and would’ve been way more interesting than a man with a broken suitcase.

Thinking about what could have been, especially since, and this bears repeating, we’re getting five of these movies is upsetting. And going into the movie imagining movie ideas that would’ve been more captivating while watching something I was already reluctant to see didn’t bode for that great of a movie experience. When I’m uninterested in a movie or tv show, I immediately start picking out plot holes and annoying details. That’s usually how I can tell I’m not enjoying something, when I’m spending more time wondering how the plot is operating than just going along with it. Of course, in a movie about a wizarding world, there’s bound to be plot holes; Harry Potter is not without them either, the difference being that the latter sweeps you up in the fantastical world so you don’t notice while Fantastic Beasts seriously uses the ear-assaulting word “no-maj” to pull you out of the story. And as it’s been pointed out before, the Harry Potter universe isn’t without a stunning lack of people of color. I’m not saying that isn’t a problem, but Fantastic Beasts’ lack of Blackness is jarring because it’s set smack dab in the middle of one of the most important Black cultural experiences of the century. Among the lack of people of color, there were a handful of other things that irked me about the movie. Spoilers ahead.

Why did Grindelwald turn into Johnny Depp? Why, JK Rowling, why did you allow this? While I was still put off by the blindingly white cast, Colin Farrell as the antagonist was perfect and you ruined it. I’m assuming it’ll be explained in the literal four other movies they’ll crank out, but the motivation behind Grindelwald’s infiltration of the MCUSA seemed lacking. He was already using Credence to find the Obscurus, but his work inside of the Magical Congress didn’t seem to lend to that goal. Was there an ulterior motive there? Speaking of Credence, all of the children were creepy and names like “Credence” and “Modesty” were both too on the nose and confusing, since it wasn’t made immediately clear that the crazy anti-wizard foster mom was pretentious enough to name her children random nouns. And, speaking of crazy anti-wizard foster mom, the actress looked exactly like the character Tina. Like, down to the hair. I was lost for a good twenty minutes trying to figure out if there was a Petunia and Lily relationship going on there because there’s no way they’re not twins. I still don’t know if that was on purpose or if this movie was so adamant about getting white actors they didn’t care if they cast the same person for two roles. Whatever.

For the main character himself, Newt was pretty annoying. His inability to look humans in the eye got old in his first scene when he came to America. We get it, Newt, you’re socially awkward and communicate better with animals than people. This awkward white guy movie trope is annoying and stupid. Anyway, the glaringly obvious annoyance here, other than Newt’s socially awkward tendencies, was that he brought his entire suitcase of fantastic beasts with him in the first place. Why, Newt? Why did you do it? You only needed to bring one. Was it explained that he doesn’t have another suitcase big enough to hold all of them, or he doesn’t trust anyone else to take care of them and that’s why he had to bring them? I can’t rule that out because I may have zoned out. If not, then it might be a little more understandable. But seriously, why if he was planning on returning one animal did he bring literally thousands? And knowing he had the capability of infesting New York with magical creatures, why didn’t he fix his damn suitcase? You’re a wizard, Newt. You can’t think of any spells to fix your suitcase full of terror? Was Reparo not invented yet? Spello-tape? Nothing? Jesus.

There’s a hundred and one more things I could pick at about this movie, but I won’t because my word counter is telling me I’m already at 1250 words, and that’s kind of a lot.

When I still used Tumblr, I saw a few cool photosets of ideas of what the movie should look like, featuring British actor Nathan Stewart-Jarrett from Misfits as Newt Scamander against a backdrop of the Harlem Renaissance. I knew, of course, something like that couldn’t happen, at least not in our Hollywood. In a franchise as big as Harry Potter, of course they would have to cast a white guy with floppy hair as the main character in order to boast more “relatability” in a worldwide market (although, let’s be real here, there’s more non-white moviegoers in the world than white ones, so this catering toward whiteness is solely for upholding the status quo. But that’s another post for another day.)

But that Tumblr photoset looked so real and it stuck in my head long enough that I started believing Nathan Stewart-Jarrett was actually cast in the movie. And finding out Eddie Redmayne, who a friend describes as one of many white British men who look like a child’s unfinished clay rendition of a foot, was cast as Newt was confusing to me. I knew logically Stewart-Jarrett was not going to be in the movie, but having that prospect, especially up against such an enticing looking photoset, allowed the disappointment to begin.

Imagining a magical movie set in 1920s Harlem with Black wizards and witches could have been groundbreaking; it would have been revolutionary. And I can’t get the image out of my head. So much so that I took it upon myself to waste time and create a video imagining what it would’ve looked like. An unconventional way for me to wrap up a blog post, I know, but for your enjoyment, here’s a trailer of what Fantastic Beasts could only hope to be.

One thought on “Fantastic Beasts”