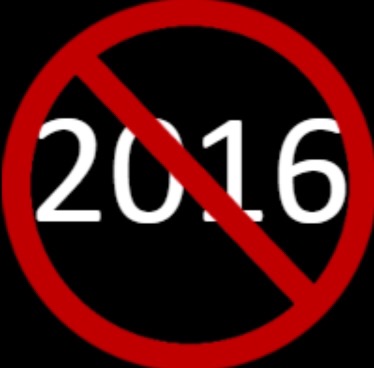 The United States of America is a hateful country. I know this isn’t news in the slightest, but it’s just something I don’t always actively think about and when I randomly remember that I’m living in a nation built on hate, it’s jarring.

I wanted to write an article at the end of the year about all of the amazingly creative and brilliant blackness that we witnessed this year. From music to television, sports to politics, there were a lot of very powerful Black statements this year. But because Black people can never have anything, America of course had to remind us of its unabashed hatred for anything that steps out of its lily-white straight male fairy tale and destroy itself before the negros got too much sense of power.

The election of a racist demagogue immediately after two terms of our first Black president proves that this country would rather light itself on fire, destroy itself from within, than allow for anyone else that doesn’t fit its idealistic mold to maintain a semblance of dignity for more than a few moments.

When I was in school, I was a member of the Black Student Alliance. Every Monday night at our meetings, we would begin with Highs and Lows of the week, where different students would talk about good and bad stuff that happened to them the previous week. It was a nice way to celebrate your victories and complain about your failures with friends and peers who understood.

My Highs and Lows for this past year have been so polarizing that I don’t even know how to feel anymore. On one hand, we’ve had an explosion of awesome Black entertainment media like “LEMONADE,” “Coloring Book,” Queen Sugar, Insecure, and more. Black girls killed it at the 2016 Rio Olympics, with our gymnastics hero Simone Biles and the Final Five, Michelle Davis, Ibtihaj Muhammad, Allyson Felix, and Ash Johnson winning medals. Movies like Moonlight and The Fits and Kicks brought us a variety of expressions of blackness that weren’t stereotyped or pigeonholed, but true. The National Museum of African-American History and Culture opened. Black people swag surfed on the White House lawn.

But, we suffered through truly the most painfully exhausting election in the history of mankind. Hundreds of thousands of people are going to lose things they hold dear, be it their money, their property, or their lives, because of our newly bought government. We got so many amazing opportunities to be unapologetically Black in 2016, only for this dumpster fire of a year to fire back with electing a nazi as its leader. Hate crimes against minorities have skyrocketed. The KKK is freely celebrating in the streets. White supremacists are openly holding meetings about “taking the country back.” No amount of cutesy hashtags on Black twitter or Shondaland shows can change that.

On election night, I texted my friend saying that I feel like I’m mourning friends I haven’t lost yet. This election has made it clear to me that my life and the lives of people I care about just don’t matter enough, and it’s not fair. I desperately want to celebrate all the good things that happened this year because contrary to the bleak and terrifying background its been established on thus far, a lot of good has happened.

But it just doesn’t balance itself out.

The underlying reason for our election of an idiot fascist is whitelash. White people are so used to being in power, they could not fathom giving up yet another eight years to someone who didn’t represent their deep seated racism. While I acknowledge that Hillary Clinton’s being a woman was also a huge part of her loss unfortunately, I truly think the biggest issue at play here is a long history of racism and hate that this country refuses to confront. White Americans were terrified of a changing country and desperately needed a representative of themselves that also believed that Muslims are terrorists and Black people are thugs and Brown people are undocumented.

This was not an uprising of the working class. This was not a rebellion against the elites. It was a direct insurrection against otherness and against Blackness. White people were scared shitless that they were losing the country, whatever that means, so much so that they set the house on fire.

This kind of hatred trickles down even further, literally. Just last month, a firefighter accused Black Lives Matter activists of setting his house on fire when he did it himself. In October, the wife of a police officer was caught trying to frame the movement for breaking into her house. Not to mention the countless incidents of graffiti and vandalism and other fake news attributed to BLM when it was committed by white people in the first place.

Hatred in this country runs so deep that racists will literally make stuff up so they have something to complain about. Imagine hating something so innocuous so much that you fabricate grievances against it. Imagine being so cowardly, so full of hate and fear. And these aren’t isolated incidents, either. This is a recurring thing in this country where, in light of lack of evidence of Black people being collectively culpable, racists invent damning evidence to pin on us.

We just wanted to enjoy our year of righteous and well-deserved blackness; uplift ourselves and others, and bask in the success of us. Can we have nothing? Are we not allowed to celebrate lest white America call the cops and bust up the party? We can’t have one museum out of thousands dedicated solely to us without white people wondering where theirs is. We can’t name a show black-ish without white people getting up in arms and using the same tired argument that seriously, seriously supposes they want a television station called WET. Remember back when a bunch of idiots really asked why all the actors in The Wiz Live! were Black? Yeah.

That kind of ignorance lays the groundwork for hatred. And, paired with the uncompromising attitudes of people like this, it sets up the foundation for fear of the unknown and ultimately loathing and violence towards it. The unwillingness of white people to have a shred of empathy or understanding is what got cheeto Voldemort elected in the first place. Eight years of a Black president was just too much, so they had to burn the house down.

It’s not fair, y’all. I mean, clearly the most appropriate reactions here should be fear and anger at white people ruining everything yet again, but I can’t help but feel immensely shorted and cheated out of what should’ve been a fantastic year for Black people. Despite the fact that this year would’ve been garbage anyway since 2016 took Prince, the highs and lows would’ve at least balanced each other out.

I wanna write something about how unfair it is that the year we get so much creative & brilliant blackness, we also elected a nazi president

I get tired of fighting sometimes; it’s hard to be up against this kind of thing day in and day out. The “you have to be twice as good to get half of what they have” adage is heavy on the heart, mind, and body. It’s discouraging and depressing and sad to look at what could have been and forced to remember why you can’t have it. The finish line is always just out of reach and every time we get closer, they move it (or blow up the entire race track and make us start again.)

One thought on “The Unrestrained Hatred of America”