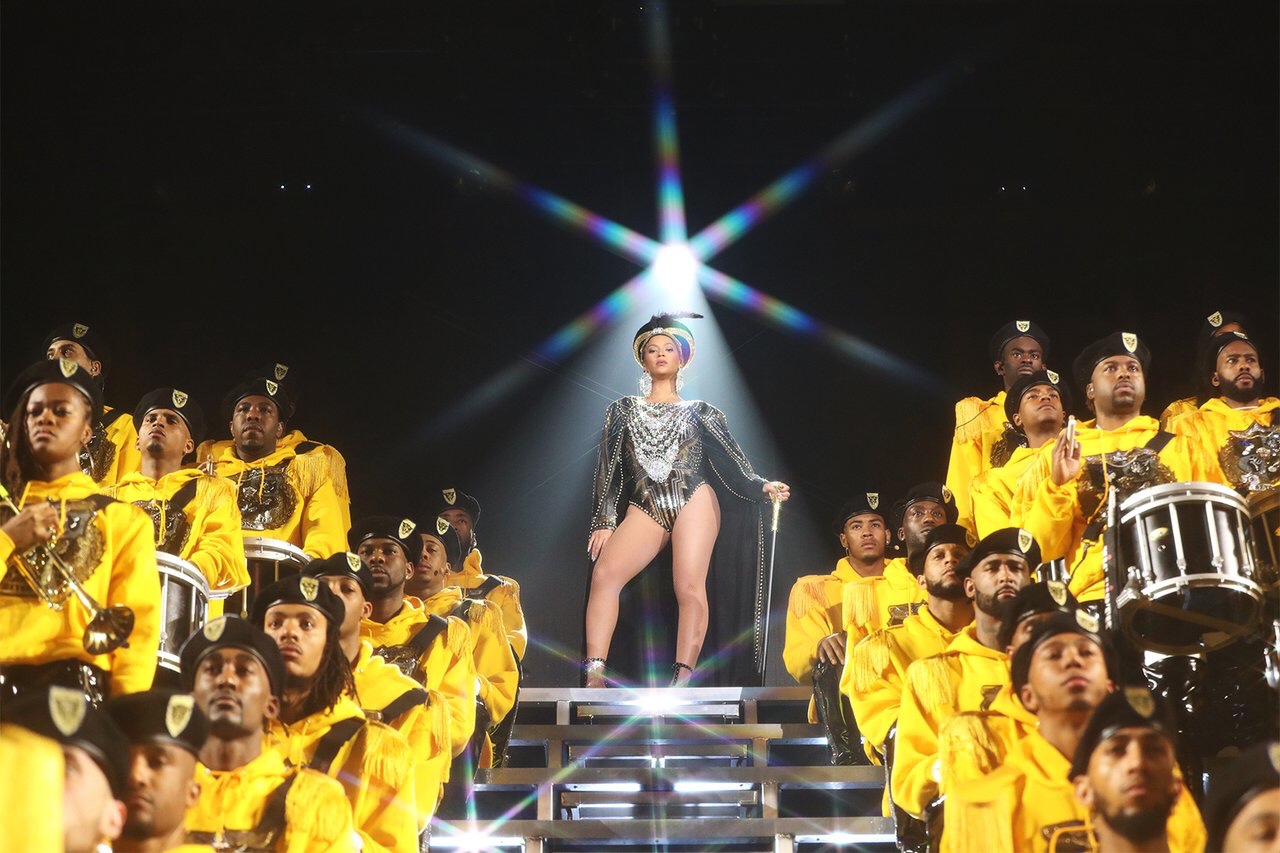 “Thank you for allowing me to be the first Black woman to headline Coachella.”

I am sitting here at work unable to focus on anything because Beyoncé stole my concentration, my edges, my soul, my entire life. Her two-hour tribute to Blackness on the whitest musical stage was full of references and callbacks to the colorful multiplicity of Blackness, and I literally, truly cannot stop thinking about it. I don’t even remember how I got to work this morning.

Beyoncé was the first Black woman to headline Coachella, and was intentionally, unapologetically, magnanimously, supremely Black about it. She opened the show in a Queen Nefertiti outfit and had a drumline made up of marching band performers from over ten HBCUs punctuate the show. She sang “Life Every Voice And Sing,” commonly known as the Black National Anthem. Her band played “Back That Ass Up.” She changed nail polish between sets. She did not let us catch our breath ONCE. I’m not being dramatic when I say I had goosebumps for two hours straight.

Bey gave us vocals in hip-hop, R&B, rock, opera, choppedt and screwed rap, and everything in between. She invented the color yellow. She did a full two hours of cardio in heels and did not lose her breath the entire time. That left boobie stayed in place because she told it to, damn it!

There were countless Easter eggs sprinkled throughout the entire performance; homages, winks, and nods to powerful Black leaders and influences who came before her. She unified blackness by showcasing its endlessness, and it was amazing. And, like Solange said, “this shit is for us.”

Beyoncé is the best. She is the undisputed queen of music. And, on top of being the most creative and fantastic performer alive, she makes it feel so damn good to be a Black woman.

Beyoncé reaffirms Black womanhood with every performance. So many of her shows exude her pride in her identity, and it makes other Black woman feel seen and heard too, something that we’re not always used too. Her dedication and devotion to blackness and Black women is unmatched and such a centering display of the power we have when allowed boundless opportunities.

I can sit here and say the new harmonies for Say My Name was my favorite part (or when Solange came out, or the Mi Gente/Baby Boy mashup, or the Hold Up/Countdown mashup, or the drumline, or the baton twirler, or the swag surf, or the key changes in Love on Top, or literally ALL of the transitions), but I can’t pick just one moment because Bey seriously wrote a love letter to Black people from all over the diaspora and celebrated us and our history and our culture and out greatness in the middle of a desert during the whitest music festival ever.

Beyoncé mouthing along to Malcolm X saying how Black women are the most disrespected, unprotected, neglected people in America was a catalyst in the show for me. She is the first Black woman to headline Coachella, ever. Over the course of two hours, more than 2 million tweets about her were posted. By reuniting with Kelly and Michelle, she broke even more records, as DC3 became the first girl group to perform at the festival. Her performance also became the highest live streamed event ever. Despite breaking records and giving us a monumental and historic cultural event, she never lets her audience forget who she is and what she’s had to endure to get there.

Beyoncé is one of, if not the greatest performer of our time. She embodies everything it is to be a Black woman, and makes space for us in her wake. Her dancers, band, directors, make up artists, everything. She surrounds herself with Black women and makes it abundantly clear that her success and flawless execution of her every move is rooted in Black womanhood. She is Black excellence in every sense, the greatest of all time. And if you think otherwise,

One thought on “The Blackness of Beychella”