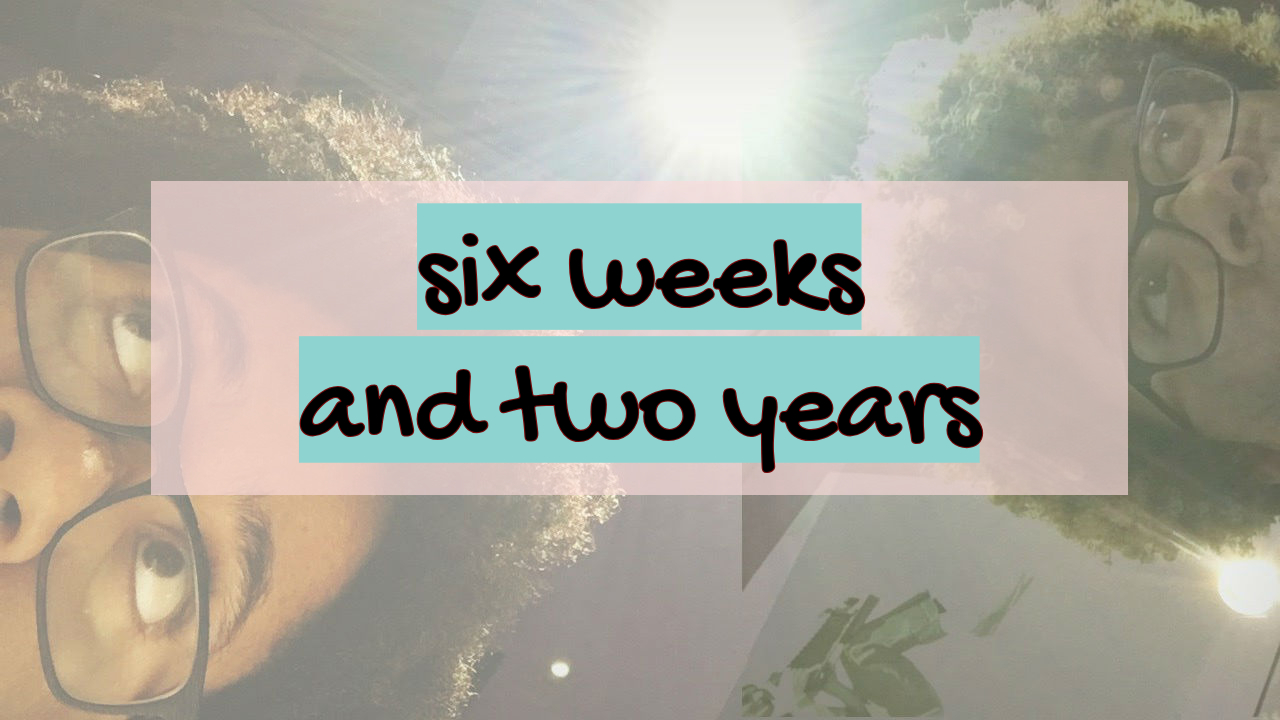 Today I completed my sixth week of my new job in Oakland. This month also marks two years that I’ve lived in California. It’s really no surprise that two milestones happened upon the same time, seeing as things in my life have a knack for compounding and exploding all at once with the intention to stress me out, probably. There’s a conspiracy in there somewhere.

I wanted to write about the first week of my job, but then I blinked and the week was over. I decided instead I’d write something to commemorate the first month working here, but that flew by as well. I have no idea what I even did during the fifth week and now here I am on Friday of my sixth week. It feels like it’s been seconds since I even got the phone call offering me this job. Time has seemed to just speed up recently and I’ve been doing a pretty good job of letting it pass right by me.

My last blog post was in April. In May, I knew I should write something, to at least, at least, adhere to the rule I’d set for myself for writing something once a month. I mean, honestly, how hard could it be? I love writing, right? This is something I’m passionate about, according to my own brain, and something I’d like to do professionally and that I love to do casually. But, May came and went. June was next, and I knew I could come up with something, anything, to put on this site that I built and pay for and use to market myself. But, nothing. It’s now the middle (ok, the end) of July and I’m sitting at my desk, typing this out when I should be working, shifting my procrastinating tendencies in a different direction.

Time, I’ve come to realize, moves incredibly fast. And if I don’t take the time (heh) to slow down and make an effort to get things done, time will get away from me.

It’s poetic, maybe, that I’ve been in this new position and this new state for a notable amount of time. Both experiences mirror each other in really weird ways that make me feel like I’m living in a sitcom or a serious premium cable drama, depending on the situation.

I left Texas because I was unhappy. I was two years out of college and couldn’t find a job, a plight many millennials have found themselves in because our government and economy is a garbage fire that hardly anyone is making an effort to salvage. I’d graduated with a degree in a field I couldn’t care less about and didn’t want to pursue anymore. I was frustrated because for my entire life, all anyone had told me was that all you have to do to get a good job was go to college, and it was becoming increasingly apparent that that was laughably untrue. I was mad at the world for lying to me, giving me the key to success and then changing the lock, pushing the finish line further and further back when I was so close. My parents and friends suggested I consider graduate school, but I was already scarred from choosing an undergrad major that I ended up being unhappy with and unwilling to go into ultra mega extreme debt. I still had absolutely no idea what I wanted to do with my life, was at the height of my depression, and my stagnation in life made me feel like a failure.

I moved to California because I wanted a fresh start. I didn’t have a plan. My grandma lives in San Jose, so I figured I could live with her for a while and try to find a job in tech, envisioning the prototypical Silicon Valley life for myself. I’m a Black female college graduate who understands rudimentary markup and sometimes uses learn-to-code apps on my phone; who wouldn’t want to hire me, right?

I left my previous job because I was unhappy. I had been there for a year when I began to feel that stagnation taking hold once more. It didn’t take long for me to realize that I was in a place that I didn’t want to be, in a job that didn’t appreciate me, or anyone else. I was frustrated because customer service is a thankless job, on top of being in the midst of a workplace that suffered from poor communication and workplace norms that fostered an almost high school-esque hierarchy that I felt held me down. I don’t have to explain how difficult it is to maintain high morale in a poor work environment; it’s not a complex notion that unhappiness at work has a negative effect on your psyche. I was mad at everything; mad at the higher-ups at my job that made bank off the same labor that paid me juuuuuust enough to get by, mad at other departments for being unwilling to listen to us and more than willing to demean us, mad at my own department for having such a weak backbone, and mad at myself for not only taking a job that treated me so poorly, but being unable to get anything better. I met President Obama, ok? He told me that I was, and I quote, “very impressive,” ok? I deserved more than to be the whipping boy of an institution that, on more than one occasion, had kids crap themselves in it, alright?

I scheduled “productivity dates” with my friends, where we would take our laptops to a library or cafe and update our resumes and apply for jobs. Sometimes it would be a lot of us, and sometimes it was just me. My dissatisfaction with my job was only getting worse, and I needed to get out before it swallowed me up.

It is also debilitating.

I can’t even begin to explain the hopelessness I started to feel. Getting rejection letter after rejection letter is such a hard thing to cope with and continue thereafter, especially while doing a job that increasingly fills you with hate.

It was so easy to retreat into myself and give up, both times. It took me months to get my first job out in California, and months to get a new job to get me out of that terrible first. And those months, both times, were rough. Having no direction and nowhere to go and a bunch of strangers emailing you from an account beginning with “noreply@…” isn’t fun. It sucks, a lot. It took me a long time and an astounding amount of outside support to ever feel like I wouldn’t be an unsuccessful loser for the rest of my life.

But, after those months and months and months of waiting and working and giving up and starting again, I found a job. The first, a job that gave me an income and helped me get on my feet; the second, a job that gives me a feeling of purpose and a clearer vision of what I want to do with my life, even though it’s only been six weeks.

The reason I’m writing this is to remind myself of where I’ve been. I am, regrettably, an incredibly forgetful person, and writing things down help me to remember. As much as my struggles and hardships in finding a passion, finding a purpose, finding a job, and then finding a better job have been, I wouldn’t be here without it. I don’t ever want to forget what I’ve been through to get to where I am now; I don’t want to lose sight of what I was aiming for or forget where I was. Everything, including and especially the bad and hard stuff, has got me here, a place I am finally, gratefully, relatively alright with. I want to maintain a semblance of reverence for my past self and the hardships I suffered through to be here, to not lose sight of the difficult road it took to get here.

It’s been a tumultuous, exhausting, amazing, frustrating, humbling, depressing, enlightening, angering, astounding six weeks and two years, and I’m thankful for everything that’s happened to get me here.

Well, maybe not those kids crapping themselves. That I could’ve done without.